By Manly Bryant on August 18, 2020
Advertisement 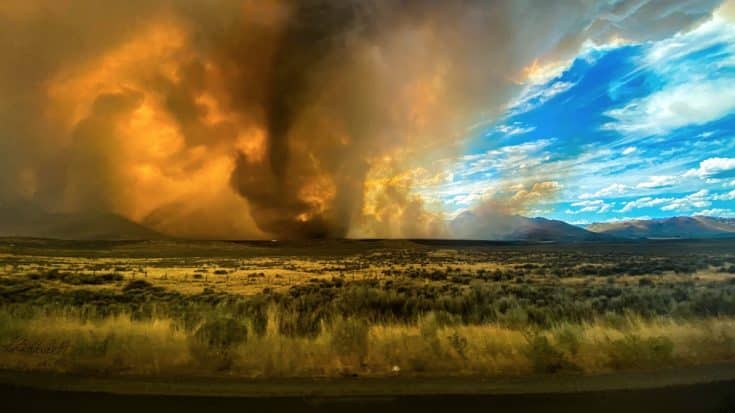 A fire started on Friday, August 14th, 2020, near California’s border with Nevada at Tahoe National Forest. More than 20,000 acres had already been damaged and firefighters are still struggling to contain it.

A fire tornado in California because it wouldn’t be 2020 without one pic.twitter.com/5HbJVsugVm

As the fire intensified, four different anticyclones joined together and created the uncommon weather phenomenon: a fire tornado. The anticyclones traveled for around four miles. The intensity of the heat and the sharp winds helped fuel the fire high into the sky.

“Hot air wants to rise, and if it’s very hot it wants to rise dramatically,” Shane Snyder, a meteorologist with the National Weather Service said, according to Los Angeles Times. “It’s allowed to rise because the temperature of the air the fire makes is much warmer than the air around it. So it keeps rising until it’s not warmer than the air around it.”

Such uncommon weather conditions can push a column of smoke tens of thousands of feet into the atmosphere. A fire tornado actually killed a firefighter in 2018. They are certainly rare but they’ve definitely occurred in California before and Kate Lynn captured one of the greatest pictures of one on August 15th, 2020.

Multiple heat records were set on Saturday (Aug 15, 2020). Downtown Los Angeles was hit with an intense 98 degrees, which was a new record since 1994. The National Weather Service issued a tornado warning as the heatwave is supposed to last until Thursday. For the ones who are out there in it, stay safe. We’re praying for you!