By Jennifer Pernicano on April 8, 2022
Advertisement 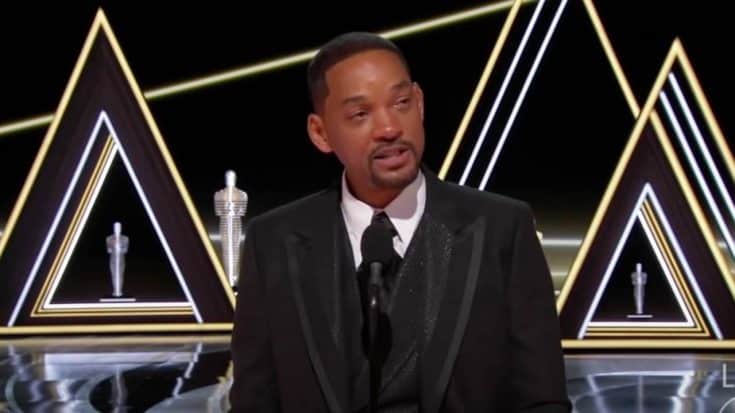 The Academy Awards took place on Sunday night (March 27) in Los Angeles, California and hosted by Amy Schumer, Regina Hall, and Wanda Sykes. Countless awards were given out, and history was made a number of times, but there was one thing that overshadowed any and all other moments during the live telecast.

Comedian Chris Rock came on stage to present the Oscar for Best Documentary, which was given to Questlove for Summer of Soul. Before he gave out the award, he took some time to rib some of the audience, including his old friends, Jada Pinkett-Smith and Will Smith. Jada has recently been rocking a shaved head, and for a good reason. Last year, she revealed she has alopecia and decided to embrace the disease and shave her head.

Rock said, “Jada, I love you. G.I. Jane 2…can’t wait to see it,” which garnered many laughs, including from Will! Jada on the other hand, was not amused, as she rolled her eyes pretty aggressively. Chris Rock defended his joke, saying it was “a nice one.”

Moments later, Will got out of his seat, approached Chris Rock, and slapped him across the face. He immediately returned to his seat. Chris seemed shocked and tried to move on to presenting the award like he was tasked. All he could muter out was, “Will Smith just slapped the sh** out of me,” while also asking Will, “Really?!”

Smith seemed visibly bothered when he yelled – twice – from the audience: “Keep my wife’s name out of your f***ing mouth!” Most of the additional commentary from Rock was muted on American television.

Those in attendance looked stunned by the incident, with Rock responding to Smith’s yells by simply saying, “That was the greatest night in the history of television.”

Here's the moment Chris Rock made a "G.I. Jane 2" joke about Jada Pinkett Smith, prompting Will Smith to punch him and yell, "Leave my wife’s name out of your f–king mouth." #Oscars pic.twitter.com/kHTZXI6kuL

Celebrities began weighing in on social media, with some blaming Chris Rock for saying the insensitive joke and others condemning Smith’s reaction to the joke with violence.

Will Smith stayed for the entirety of the awards show, and he even won the award for Best Actor for his role as Richard Williams in the film King Richard. His speech lasted longer than any other speech that night and was never played off by the band, as some people are when their speeches take too long. During his speech, he apologized to the Academy, his fellow nominees, and many other people except Chris Rock. He said that love makes you do crazy things, alluding to the slap.

The Academy announced on March 28 that would be launching a formal review into the situation.

The Academy of Motion Picture Arts and Sciences has launched a formal review following Will Smith’s assault on Chris Rock at Sunday’s Oscars ceremony. https://t.co/WGTpL1oBxP pic.twitter.com/l9vk8LqC9k

Many wondered why Will Smith was allowed to stay at the Oscars after the incident, and even able to accept an award…and receive a standing ovation for it. Well, on Wednesday, March 30th, The Academy of Motion Pictures and Sciences released a statement about the incident.

“Things unfolded in a way we could not have anticipated. While we would like to clarify that Mr. Smith was asked to leave the ceremony and refused, we also recognize we could have handled the situation differently.”

]The Academy says they “may take any disciplinary action, which may include suspension, expulsion, or other sanctions permitted by the Bylaws and Standards of Conduct.”

They also apologized to Chris Rock and viewers watching from home.

“Mr. Smith’s actions at the 94th Oscars were a deeply shocking, traumatic event to witness in-person and on television. Mr. Rock, we apologize to you for what you experienced on our stage and thank you for your resilience in that moment. We also apologize to our nominees, guests and viewers for what transpired during what should have been a celebratory event.”

Will Smith has since apologized publicly to Chris Rock and resigned from The Academy.

On Friday, April 8, The Academy released an open letter revealing that they are banning Will Smith from The Oscars for ten years.

“Today, the Board of Governors convened a meeting to discuss how best to respond to Will Smith’s actions at the Oscars, in addition to accepting his resignation. The Board has decided, for a period of 10 years from April 8, 2022, Mr. Smith shall not be permitted to attend any Academy events or programs, in person or virtually, including but not limited to the Academy Awards.”

This means he will not be allowed to attend next year’s ceremony and hand out the Best Actress trophy, a long-time tradition of the show.

According to a tweet from Variety, Will Smith has responded to The Academy’s 10-year ban, saying, “I accept and respect the Academy’s decision.”