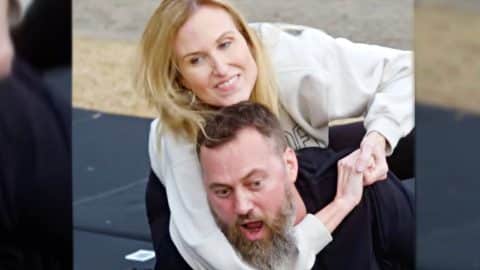 Willie and Korie Robertson tested their wrestling skills in an exclusive clip from At Home With the Robertsons.

In the clip, the former Duck Dynasty stars were joined by professional wrestler Thea Trinidad, who also went by Zelina Vega in WWE. Thea guided Willie and Korie in a wrestling match. The married couple circled each other with a bit of loving trash talk while Thea operated as the game referee and announcer.

WWE fans will be excited to see Thea, who was unfortunately released from her WWE contract following a breach of contract. The violation occurred at a time when WWE was making changes to their standards on third-party platforms. Thea had a large following on Twitch’s streaming platform; she also created an OnlyFans account to show off her cosplay costumes.

In the video, costumes were digitally drawn onto the Robertson’s to imitate an actual wrestling match. After Thea made introductions, Willie and his wife sprung into action. Korie put her husband into a headlock and was ultimately crowned the winner of the friendly match.

See the full clip in the video below.

For more on At Home With the Robertsons, check out the video below.