By Jennifer Pernicano on April 2, 2020
Advertisement 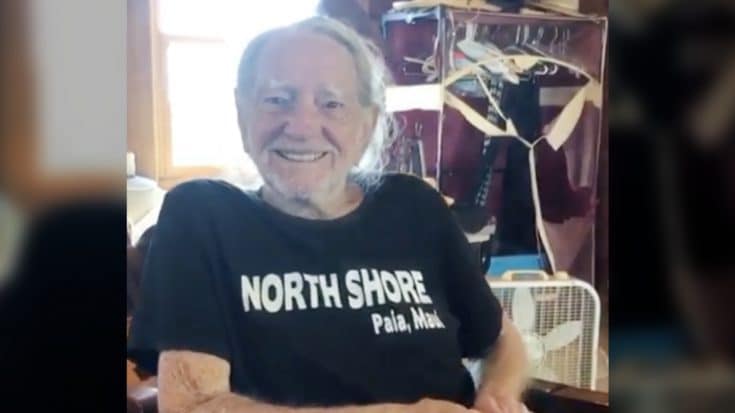 It should come as no surprise that Willie Nelson enjoys marijuana.

He’s been a huge advocate for the legalization of marijuana and has even admitted to smoking a joint on the roof of the White House during Jimmy Carter’s presidency.

He wrote about it in his 1988 autobiography Willie: An Autobiography:

The country legend later coyly spoke about it in 2012 when a CNN reporter asked him, “Is it true you rolled a joint on the roof of the White House?”

Nelson’s response to the question was priceless:

“No I rolled it before I got up there,” he said before taking a sip from his coffee.

Every year, there is an unofficial marijuana holiday that falls on April 20, or 4/20, and you better bet that Willie participates!

Because this year is 2020, marijuana enthusiasts have joked that the entire month of April is actually 4/20, and technically speaking, they aren’t wrong!

Someone who was pretty excited about that fact, especially in these stay-at-home and quarantined times, is Willie Nelson.

He and his son Lukas have been quarantined together and performing what they are calling “Quarantunes” for their social media following.

Lukas Nelson, @willienelsonofficial & Micah Nelson (@particlekid) – Lukas Nelson and POTR’s Turn Off The News And Build a Garden. . Since we are only 4 days away from releasing #NakedGarden we thought it would be the perfect time to share the song that started it all! #TurnOffTheNewsAndBuildAGarden ? Performance is from the @luckreunion #tilfurthernotice broadcast last Thursday, where I got to sing this song with my dad and brother Micah (@particlekid)  Even if you don’t have your own physical garden right now, I hope you will join us, close your eyes and find the garden in your mind ?

Lukas took to Instagram to tell folks that “Quarantunes” wouldn’t be happening tonight (April 2), but there is some other good news.

“You got some good news for us, Dad?” Lukas asked.

They both got a good laugh and so did we! Watch the video below.

Hey y’all! Unfortunately, today’s #Quarantune session will be postponed until tomorrow evening. But don’t worry, dad’s here to help us relaunch our #GoodNewsGarden! You can submit your own good news on our website. We would love to hear what makes you smile these days ? (link in bio) #GoodNewsGarden @williesreserveofficial #williesreserve