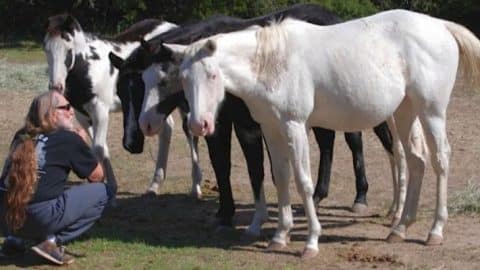 Willie Nelson, the 85-year-old legendary country music artist from Abbott, Texas has a heart of gold. According to KAST 12 News who interviewed him says Willie apparently rescued 70 horses from going to the slaughter house.

“My horses are probably the luckiest horses in the world,” Nelson said. “They get hand-fed twice a day, and they were just ready to go to slaughter is probably the last thing they remembered, so they’re happy horses.”

Willie even wrote a letter to the Senate of the United States asking them to ban the slaughter of horses in America. His horses he rescued live on a 700-acre ranch in Texas Hill Country and get to roam wild and free. Willie says he spends most of his time on the ranch when he’s not on the road traveling around playing music. He calls his ranch “Luck” and said this with a smile:

Willie also got together with Habitat for Horses and spoke with them on how they can stop horse slaughtering, keeping horses who live in the wild safe and how to prevent the abuse and neglect of horses. They also spoke about rehabilitation programs for the horses and how they can find ways to relocate the horses that have been abused. HFH showed great appreciation to Willie for spreading the message saying:

“None of this would of happened without supporters like Willie Nelson”

Garth Hudson of The Band came by to join in on the fun with Willie and Family in Poughkeepsie, NY.

Traveling on the road about 200 days of the year playing music, Nelson also mentioned that he’s working on a new CD album with a song about his horses called “Ride Me Back Home” that will be released in the early summer dedicated to his love for horses.

Other than playing music and saving horses Willie Nelson is a big marijuana activist fighting for the legalization of it. He even has his own brand of marijuana called, “Willie’s Reserve,” and is raising money for the cause when he plays at the Farm Aid Concerts.

It seems like there’s no stopping Willie from doing what he loves to do. He says himself that retirement is never gonna happen.