Willy Wonka’s Infamous River Wasn’t Chocolate At All, “It Was Disgusting Stuff” 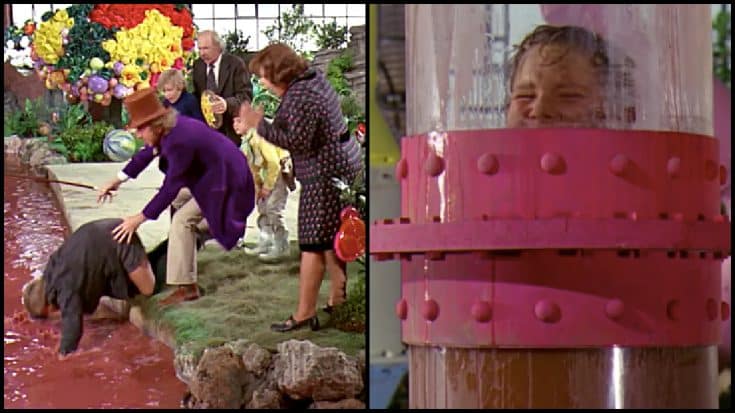 In 1971, Willa Wonka and the Chocolate Factory came to the big screen and encouraged fans of all ages to imagine what it would be like to live in a world surrounded by candy. While it was easy for viewers to immerse themselves in the dream of a real-life candy land, the five children who starred in the now-cult favorite had to dig a little deeper into their imaginations when it came to filming.

The cast recently celebrated the movie’s 50th anniversary with many of the cast members appearing in interviews to share their memories of making the film and what it was like to work with Willy Wonka himself, Gene Wilder. Several behind-the-scenes secrets came to light including the real story behind the infamous chocolate river.

Many so-called movie experts have claimed over the years that the river was thinned down, watery chocolate. But, the actor whose job was to fall into the river has a different story.

Michael Bollner who played Augustus Gloop, the first child to fall victim to Wonka’s chocolate factory, appeared on This Morning and shared that the chocolate river had no chocolate in it at all.

Bollner’s co-star, Julie Dawn Cole who played Veruca Salt recalled in a separate interview being concerned for Michael. “Michael had to fall into this disgusting stuff that had been sitting there for three weeks. It had the lights on it, and people were emptying their coffee cup dregs into it.”

Bollner recalled the dangerous fall into the river saying, “The river was just 10 centimeters deep. And there was a hole about a square meter that I had to hit. So I was very scared that I would not hit the square meter, and would punch my head in the ground of the chocolate river.”

“I remember watching that and being quite afraid for Michael because they were very adamant that, you know, ‘Not 6 inches to the left, not 6 inches to the right.’ Those were the shallow bits. There was a trough there that he could fall into. But, of course, you couldn’t see that because the chocolatey water masked it. So he had to really be specific on where he was going to tumble and hit that spot. I remember being quite anxious for him,” Cole said.

Despite the not-so-pleasant parts of the filming process, the cast has fond memories. Four of the five former child actors reunited via Zoom recently and Paris Themmen, who played tv-obsessed Mike Teevee, said that their time on the film “was like having their own Disneyland ride that only they got to experience.” All of cast agreed they are very much a family and that the film significantly impacted fans for decades.

Relive the iconic Willy Wonka and the Chocolate Factory chocolate river scene in the clip below.