With Tears In His Eyes, Alan Jackson Honors 9/11 Victims Through 2006 Performance Of “Where Were You”

By Miranda Raye on September 10, 2018
Advertisement 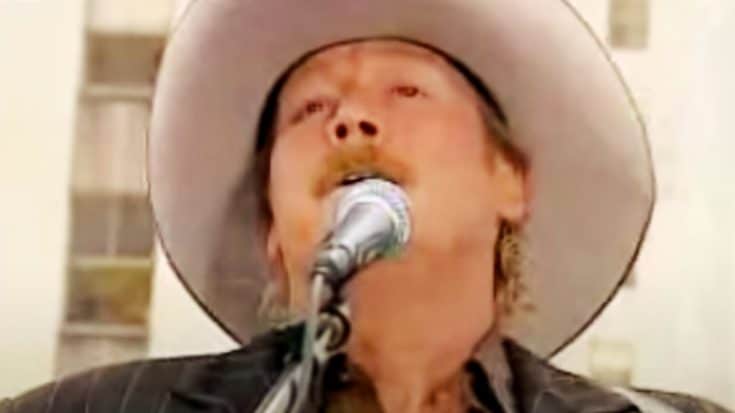 How Alan Coped With Tragedy

September 11, 2001 was a saddening day for people across the country. Years later, many remember exactly what they were doing and where they were when they heard the tragic news.

Alan Jackson channeled those feelings into a song, “Where Were You (When The World Stopped Turning).” Jackson sang it for the first time at the CMA Awards on November 7, 2001, less than two months after the attacks.

Years later, in a video special filmed for the CMA Awards‘ 50th Anniversary, Jackson looked back on that emotional debut performance:

“It was a nervous performance, of course, doing it for the first time live in front of everybody, and television. In retrospect, now I realize it was a good thing for the show and for all people who’ve told me how much the song had affected them.”

Although the song was a major success and topped the Billboard Hot Country Singles & Tracks chart for five weeks, Jackson had been hesitant to release it:

“I thought we’d perform it for a little while and then it would just go away, you know, cause I didn’t feel like people would want to keep thinking about that,” he said in an interview on his official YouTube channel.

So Many Emotions Involved

The song has stuck with the nation as one that captures the emotions associated with 9/11:

“I mean even today I see people waiting on that song in the crowd. Some places they’ll be on their feet several minutes after you finish the song,” Jackson once said.

Jackson’s song truly represents the feelings that come to many Americans’ minds every September 11 that passes by.

The song continues to tug at Jackson’s heart as well. Even years later, he still got choked up while singing it during a visit to The Today Show.

The year was 2006, and Jackson dedicated “Where Were You” to those who died on that fateful September day five years prior:

“I’d like to do this song especially for all the people that died five years ago, the policemen, the firemen, the civilians, Flight 93, and the Pentagon.”

When Jackson performed the song on The Today Show he often had to close his eyes to fight off his tears. The audience, with firemen and military members in their presence, waved American flags back and forth like lighters at a concert.

Head below to watch that performance. You may want to grab a box of tissues first, because it’s emotional to watch.