Wolverine Chomps Down On Trail Cam – See The Photos

By Manly Bryant on November 19, 2021
Advertisement 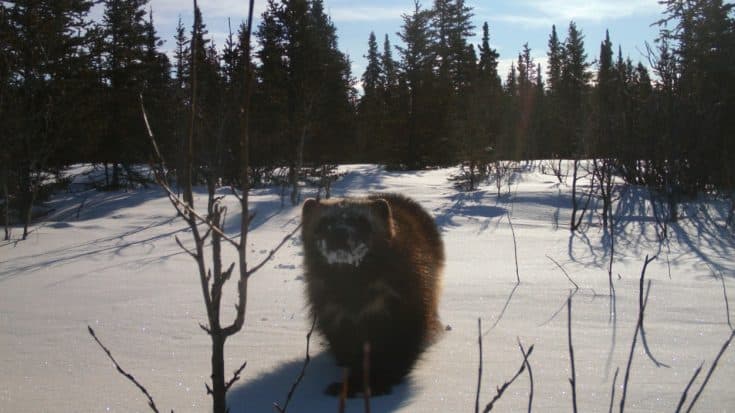 The Denali National Park and Preserve shared a few photos on social media showing the moment a wolverine decided to get up close and personal with a wildlife trail cam.

The park showed that the photos were taken on Tuesday, November 16 during the day while there was a layer of white snow on the ground. The first photo showed the wolverine curiously looking at and investigating the trail cam from a safe distance.

The second photo showed the wolverine getting a little more curious about the foreign object and taking a few steps closer to get a look at it.

The third photo comes in as a bit blurry due to the fact that the wolverine decided to put the entire camera in its mouth. It chomped on the camera a few times before getting bored and running back off into the wilderness.

“Closer…closer…chomp! And gone,” the park wrote on Facebook. “When was the last time you saw a picture of the inside of a wolverine’s mouth?”

Fortunately, the trail cam survived the attack and the photos were collected to be publically shared.

“Trail cameras are just one tool that gives us a brief glimpse into their lives – and mouths!” the park wrote.

“The elusive wolverine is famed for its toughness and ferocity, but wolverines have a softer side too,” Denali National Park wrote. “After leaving their mother, juvenile wolverines will sometimes spend time traveling with their father. This potentially helps the young wolverines improve their foraging skills.”

The Denali National Park and Preserve is a 6-million acre park and located in the beautiful southern part of Alaska.

It is known to have some of the most incredible wildlife on the planet. Watch a video below that shows some trail cam footage of many species of wildlife in Alaska.