Woman Attacked By Mama Bear While Walking Her Dogs

By Manly Bryant on January 18, 2022
Advertisement 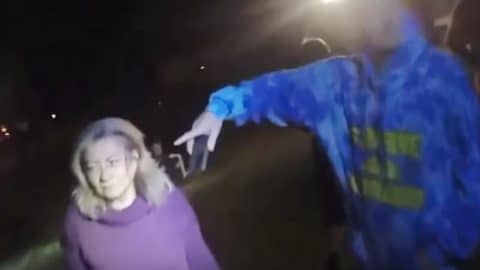 Aydee from Debary, Florida says she is lucky to be alive after she had an aggressive encounter with a black mother bear protecting her three cubs.

Aydee said she was walking her dogs Amaya and Hemmy on Thursday evening in her neighborhood and had just stepped into her driveway when she spotted the bear in her yard.

“I took off running… and then, she was running behind me. She grabbed me by my shoulder, and I fell to the ground,” told WRDW.

The adult black bear chased and tackled her to the ground by the street giving her a concussion and it scratched and bit her face and lower back.

Fortunately, the neighbors ran over and helped save her by screaming at the bear and scaring it off. They then got her to a hospital where she received stitches.

“The worst [experience] of my life… Like, you go through stuff in life, but this is like the worst. No. 1, I would say,” she said. “I feel lucky to be alive.”

Neighbor Austin Kennedy said that prior to the attack, a couple was across the street when the bear came out of the woods and started getting aggressive with the couple, acting like it was going to charge them.

“The bear came down because she had… cubs, came down [and] went after her. He scared the bear away from her, and then… the bear ran that way and attacked the lady,” he said.

When Florida Fish and Wildlife Conservation Commission Officers arrived on the scene, they found the bear in a tree with its cubs and tranquilized and euthanized it.

“Unfortunately, the neighbor got scratched up by the bear. She’s fortunate to be alive, I guess, but as far as euthanizing it, why not relocate it?” another neighbor David Mangham said.

According to the Fish and Wildlife officers, Aydee’s injuries show that the bear has already attacked one person and they fear it may attack again and risk killing someone living in the neighborhood.

“We can’t have bears living in neighborhoods that are willing to hurt somebody. We just can’t allow it,” Davis Telesco, the FWC’s bear management program coordinator said.

The three bear cubs, described as 100-pound yearlings, “were determined to be old enough to survive on their own, so no attempt was made to capture them,” according to the FWC.