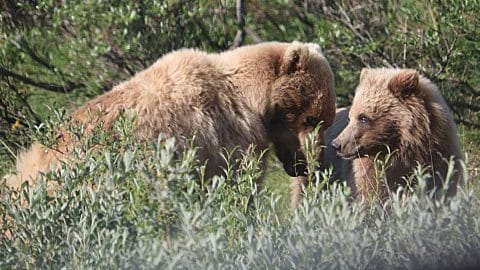 A grizzly bear at Yellowstone National Park injured a visitor on Monday, June 22nd, 2020, while she was hiking on a trail near Old Faithful.

According to a park press release, the 37-year-old woman from Missouri was hiking alone on the Fairy Falls Trail when she encountered two grizzly bears "at very close range." https://t.co/PMJgLFq1Lg

KTVQ reported it was a 37-year-old woman from Missouri who was hiking alone on Fairy Falls Trail when she ran up on a mother grizzly bear near the trail with her cub.

The woman said the mother ran up to her and pushed her down to the ground which scratched her thigh. Her face got scratched from falling to the ground. She tried to use bear spray on it but both the bears walked off into the woods. The lady was offered medical attention but she declined it.

Kerry Gunther, a bear management biologist said because the bear was displaying her natural behavior for protecting her cub, no action will be taken to kill or capture the bear. However, Yellowstone National Park had decided to temporarily close a few trails to give the bears time to move out of the area.

“From the injured person’s statements, this appears to be a typical case of a mother grizzly bear protecting her offspring following a close-range encounter,” Kerry said.

This is the first incident of the year of a bear injuring a person at the park. The last time someone was injured by a bear was in June 2019. A black bear bit into a tent that was occupied by a woman and her leg got bruised.