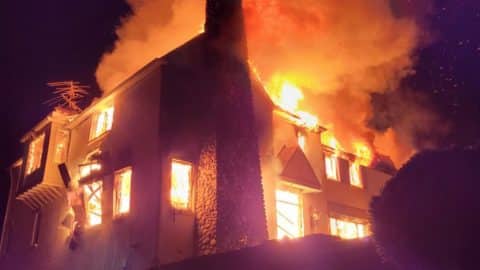 Chief Spokesperson for Montgomery County Fire & Rescue Service Pete Piringer shared a few photos of a home that was accidentally caught on fire after a woman tried to get rid of a snake infestation.

Pete said the incident took place in Montgomery County, Maryland on Big Woods Road near Poolesville. The homeowner was allegedly trying to use hot coals to smoke out the infestation of snakes that had taken up the home as their own residence.

The hot coals reportedly got too close to some flammable materials and within seconds, the home was going up in flames. The fire department was called around 10pm and 75 firefighters responded, showing up on the scene.

The fire started in the basement of the home and ended up consuming just about everything causing more than $1 million dollars worth of property damage.

Photos were taken during the fire and shows flames shooting up into the sky from the roof and second-story windows. Other photos showed the aftermath of what it looked like after they finally put out the fire.

Fortunately, no one was injured during the fire except the snakes that infested the home. The snakes were obviously not a problem anymore. However, now the homeowner has to deal with an even bigger problem: finding a new place to live.

The type of snakes that were in the home were not specified but the Maryland Department of Natural Resources says the only dangerously venomous snakes in the state are the eastern copperhead and the timber rattlesnake.

See Photos Of The Burning Home Below