By Jennifer Pernicano on April 29, 2019
Advertisement 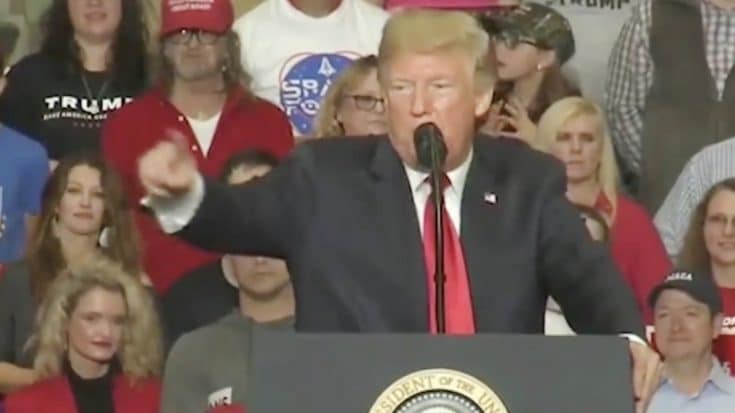 President Trump’s November 5, 2018 rally in Missouri, which according to Mirror UK was his final rally before the midterm elections, was brought to a sudden halt.

In the weeks leading up to the November 6th election day, Trump rallied around the country, making several stops in The Show-Me State.

This rally made headlines, not because of the issues that were discussed, but because of a woman in the crowd, who collapsed from fainting. Concerned, President Trump asked the crowd, “Is there a doctor in the house please?”

As paramedics rushed to aide her and President Trump put the rally on hold out of respect, he encouraged the crowd to say a prayer for the woman.

“That is one of our great people,” Trump said while the woman was getting looked at.

What happened next will give you chills.

Hearing just one voice sing “Amazing Grace” is an incredible thing, like when Alan Jackson recorded his version in 2013.

But when hundreds of voices come together for the chilling song, it makes it even more powerful. And when the performance is impromptu and it’s being sung by a room full of strangers? Just…wow.

That’s exactly what happened at the rally. Everyone wanted this woman to know that they were with her every step of the way.

President Trump did not continue the rally until her knew the woman was taken away by the paramedics. He then thanked the crowd for the beautiful moment.

“Hopefully she’ll be okay,” he said.

Watch the video below for the extremely powerful moment.