Woman Comes Home To Black Bear In Her Hot Tub 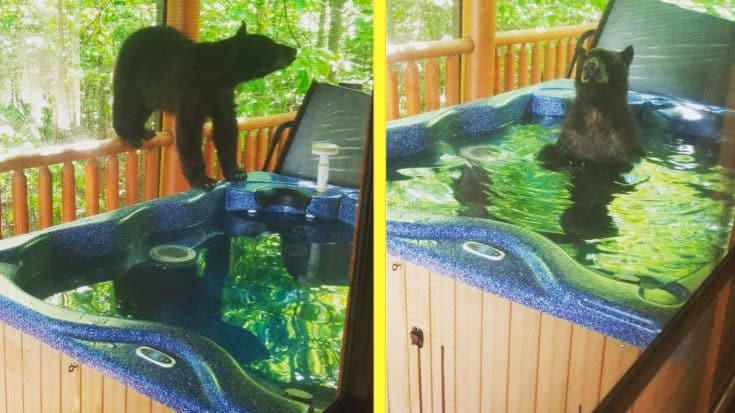 A woman who was on vacation with her family in a quaint cabin in the woods of Gatlinburg, Tennessee got the surprise of a lifetime on May 2, 2019.

Elizabeth Strickland was shocked to see three baby bears and their mama bear on the porch of the cabin she was renting, where she enjoyed herself just hours before.

Bears have gone viral plenty of times before and for many different reasons, like this one did in 2010 for waving to tourists.

Or in 2016 when a mama bear and her cubs went swimming in Lake Tahoe with a bunch of tourists around them.

Now, a couple of bears are again going viral for taking a dip, but not in a huge lake. This time, their water of choice was a hot tub on a vacation cabin’s porch.

WBIR 10News reports that Strickland saw three black bear cubs on her porch, and one even hopped in the hot tub! The news reporters said one of the photos of the bear looked like he was texting!

Strickland grabbed her phone to snap some photos and sent them to WBIR 10News, saying, “I just had to share with y’all. I was in that same seat 14 hours ago!”

She revealed that the cubs played around for a bit and left on their own.

We almost want to ask this woman to go back and find the bear to see if she walks on her hind legs like Yogi Bear and Boo Boo!

According to Tennessee Wildlife Resources Agency, these bears may look cute when they do this, but we do have to remember that they are wild animals.

“They have been called a charismatic mega-fauna and for good reason–everyone from non-hunters, to hunters, to wildlife watchers – we all love bears in our own special ways,” their website reads. “For these reasons, it is everyone’s responsibility to keep them wild and keep them alive.”

Have you ever been in a situation like this before?! Let us know in the comments.