By Manly Bryant on January 19, 2022
Advertisement 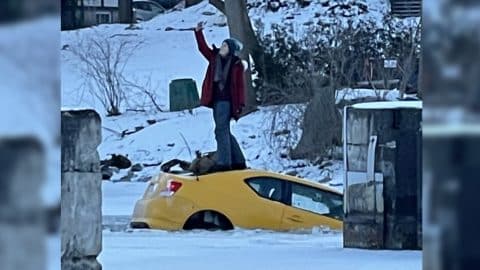 A Canadian woman was rescued this past weekend after driving on an icy river and crashing into it, only to stand on top of her sinking vehicle and take a selfie.

Fortunately for the women, residents of Ottawa’s Rideau River watched the woman crash into the river and quickly sprang into action to save her from the dangerous position she found herself in.

They used a rope and tied it to a kayak and slid that across the frozen lake to her. She then grabbed onto the kayak and jumped onto it as safely as she could.

However, before she did that she was caught on camera smiling and taking a selfie of herself standing on her car as it slowly sank.

They pulled her across the ice to safety. She got off turned her back to see her car almost fully submerged in the water.

This evening a car went through the ice in the south end of Ottawa. Thankfully no injuries and an amazing job by local residents saving the driver by using a kayak and quick safe thinking. Another reminder that “No Ice Is Safe Ice”. Please use extreme caution this winter season! pic.twitter.com/zpWdeyYzps

The Ottawa police said the woman crashed through the ice at the south end of the river in the suburb of Manotick around 4.30pm on Sunday.

Lynda Douglas, an Ottawa resident shared a photo of the scene on Twitter and said she snapped the image while on the phone with 911.

“Thankfully no injuries and an amazing job by local residents saving the driver by using a kayak and quick safe thinking. Another reminder that ‘No Ice Is Safe Ice’. Please use extreme caution this winter season!” the police department said in a tweet.

Another onlooker witnessing the incident said that he was completely amazed at how everything worked out for the girl to be safely rescued that quickly.

“So luckily one of my other neighbours, Rob Crober, had a rope that he had got, so he ran back to his place to grab one of his kayaks off his kayak rack,” Zachary King said. He was untangling the rope while the neighbour got back, after which they tied the rope to the kayak and “then just got it out to her”, he said.

“It’s like everything worked out perfectly. Got her on the kayak, pulled her in. And as soon as we pulled her in, the car went under. Fully.”