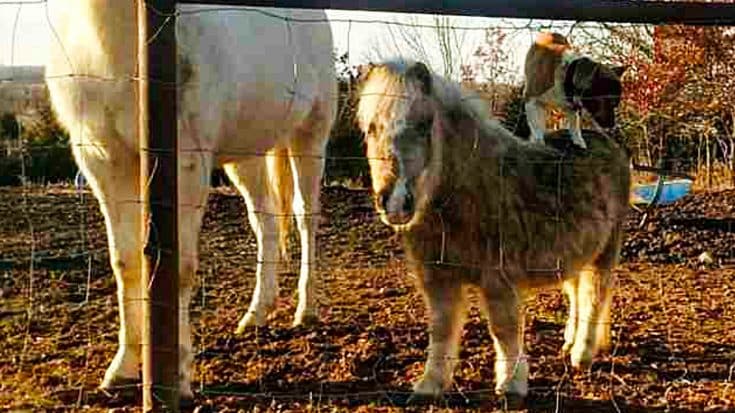 One of the funniest home videos was filmed by Callie Schenker when she pulled into her driveway one night in Missouri. She ended up recording what appears to be the neighbor’s dog riding her miniature pony!

Corgi Sneaks A Ride On Pony At Night

This woman is about to find out that her neighbor's corgi has been sneaking into her yard at night to ride her pony ?

“I was astounded,” Callie said. “I had no idea that, on the one hand, the dog could ride. And two, that Cricket was letting him do it.”

Cricket is the name of the pony who was about three feet tall and only had one eye. The dog was a corgi who belonged to the neighbors about a mile down the road. Callie said she was super surprised to see them like this because she didn’t even know the two were hanging out together.

She posted the video to Facebook and it went viral. Many people couldn’t believe it either and commented on her post that it was a fake video, that someone must have set it up.

“People said I must have put the corgi up there. Tied him on there,” Callie said. “People were like, ‘That’s a corgi, he can’t just get up on that pony.’ I’m like, ‘He just did.’”

A couple of weeks later Callie was inside her house putting on makeup when she looked out her window and saw the corgi trying to jump on the pony’s back. Callie quickly grabbed her camera and captured him doing it.

She later posted the video to YouTube showing the people that it was not fake, proving the corgi really was jumping onto the pony’s back and riding around.