By Manly Bryant on December 2, 2020
Advertisement 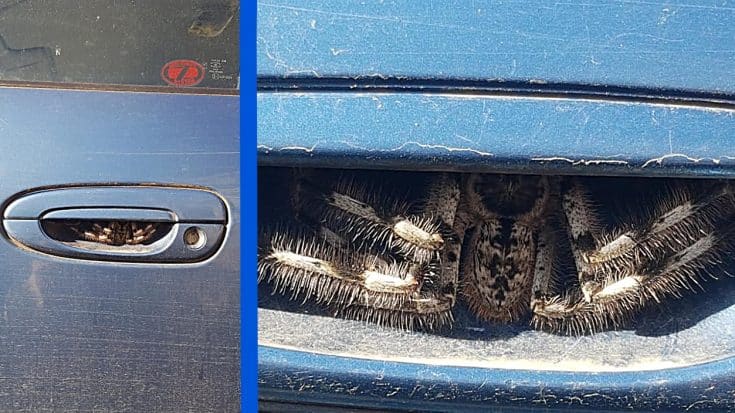 Christine Jones, an Australian woman from New South Wales was about to get into her car when she noticed a big, bad, hairy, eight-legged creature tucked under the door handle.

It was no small spider either, that thing stretched the entire length of the door handle. Christine took two pictures of it and posted them to the Facebook group Australian Spider Identification Page.

“Saw it at last moment,” she wrote on Facebook. “Thought it was hairy caterpillars at first. Haven’t used my car for a week. Armidale, NSW.”

Christine said that the spider wasn’t on the driver’s side of the car so she just left it alone and just used another door to get into the vehicle. What happened next though may shock you. She said she drove 100kms (62mph) for 10 minutes and when she got out of the car it was still there perched under the door handle.

“Fortunately it wasn’t the driver’s side and I could just use another door. But it is still there after 100kms per hr for 10 mins,” she added.

Within two days her Facebook post has received more than 220 comments and over 2.6 thousand shares. Some people commenting believe it was a huntsman spider which can grow a leg span of up to 5.9 inches long.