Woman Horrified After Finding Gigantic Spider In Her House 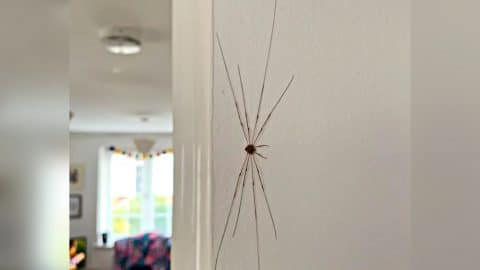 25-year-old Alina from Cambridge, England was horrified when she got up in the morning and went to the kitchen to make a drink and spotted a massive, seven-inch spider stretching its legs out across her living room door frame.

According to The Sun, Alina said, “I don’t know how long it had been there or where it came from, but it scared the life out of me and made me feel very itchy. I froze and called my partner’s name – I didn’t want to get too close to it in case it moved!”

She took a photo of the bug and shared it on the community site Reddit, asking the community what it was. Many people chimed and said that it was a daddy long legs spider, however, it was much bigger than they are known to grow in the area.

“We live in a fairly rural area next to quite a lot of fields so we get a lot of spiders and crawly things but I’d never seen anything like this before,” Alina said.

Alina’s post received hundreds of comments with people in disbelief of how big it was.

One wrote, “It’s a daddy long legs on steroids.”

And one said: “You are absolutely kidding me. That’s horrific!”

Professor Adam Hart who is a spider expert spoke up and said that it was not a daddy long legs, but instead, it was a Dicranopalpus Ramosus which is a type of huntsman spider.

Adam Hart told The Sun, “What we have here is, believe it or not, not actually a spider. It is another type of arachnid in a group called the Opiliones – more commonly called the harvestmen. The arachnids have a number of different groups, including the spiders, the harvestmen and scorpions. Harvestmen usually look like raisins with long spindly legs. And unlike spiders that have big chunky ‘back end’ and the front part where the legs are, they don’t have two sections to their body. They are totally harmless.”

That was good news for Alina to hear. She said that her partner was able to capture the creature and he released it back into the wild.

“I’m glad to read they’re harmless but I certainly don’t want to see one in my house again!” she said.