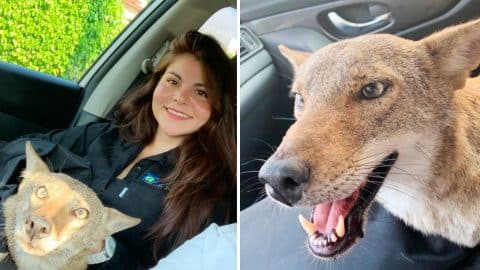 A woman named Andrea Athie from Cuidad Victoria, Mexico saw what she thought was a hurt dog on the side of the road. He looked to have a broken leg and she knew she needed to help him.

She brought it into her car and took him to a veterinarian clinic when she learned the truth about the dog – it was actually a coyote!

“Today my sister picked up a COYOTE thinking it was a run over dog and took it to the vet,” her brother Alejandro Athie tweeted on September 26.

Because of its injuries, the coyote needed medical attention.

On September 28, Andrea tweeted, “Coyote Pancho Today begins a 5-day treatment to see if he can recover mobility in his back legs.”

Despite finding out the coyote, which she named Pancho, is actually a coyote, Andrea has stayed invested in his recovery, which sadly isn’t going well. As of September 29, she wrote that Pancho isn’t responding well.

“He doesn’t want to eat or cooperate to try to move after his treatments,” she wrote in Spanish.

It should be noted that Pancho was very friendly, didn’t attempt to attack her and can even be seen resting his head on her lap in the photos.