Woman Jumps Into Ocean To Save Struggling Deer 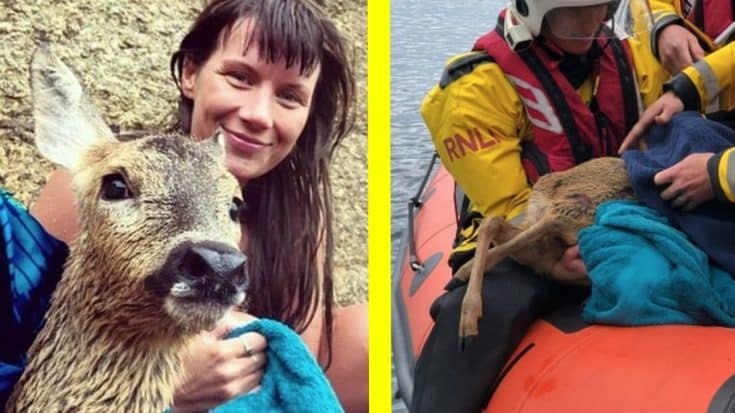 Sam March, who lives in Penzance, a town, civil parish and port in the Penwith district of Cornwall, United Kingdom, saved a deer from drowning after it swam out into the ocean.

She said she was on her way to Battery Rock to go for a swim that day and before she got into the water someone asked her if she had seen a deer. She had not, so she replied no, and got into the water. She swam around for a while and later made her way back to shore.

After climbing out of the water, she turned around to look at the ocean for its beautiful view and that’s when she noticed the deer struggling in the water not far from where she was. There was a man fishing on a pier near to them and she pointed at the deer and yelled to the man that she was going to go try to save it.

Sam got back into the water and swam towards it. She said the deer could swim faster than her but she used a strategy of swimming on the left-hand side of the deer to get it to go towards land. It worked. The deer managed to make it to the rocks where it stumbled around until she got to it. By this time, a crowd had gathered around to watch.

A friend of hers in the crowd threw down a towel to put over the deer’s eyes and she stroked it to calm it down until a rescue boat could come. After twenty minutes of being in the water, the rescue boat finally arrived and the crew pulled them both into the boat. The deer was taken ashore and transported to a woodland location to be released. You can view the release video below!

What a wonderful sight! Job done ✅