Woman Kicked By Wild Horse After She Hits It With Shovel

By Manly Bryant on July 2, 2020
Advertisement 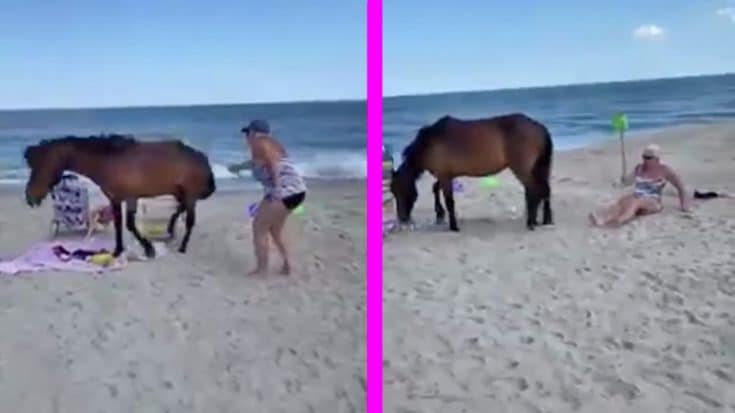 A beachgoer was kicked by a horse after she hit it with a shovel, according to a video posted on social media June 27, 2020. In the video, it appeared that the horse was attempting to go after the woman’s food while she was enjoying her day at the Assateague Island National Seashore in Maryland.

The footage shows the animal sniffing around the woman’s belongings while she walks up behind and hits it with a shovel, in what appears to be an attempt to shoo it away. When the pony is hit, it kicks the woman from behind with both back legs.

Law enforcement staff were notified about the video, as it violates the Wildlife Protection Code prohibiting the feeding, touching, teasing, frightening, or intentional disturbing of the horses. These ponies are protected by law and visitors are only allowed to observe from a distance.

Wild horses in Virginia are part of the Annual Pony Swim which started in 1924. Approximately 150 wild horses are rounded up on Assateague the last Wednesday in July. The horses then swim across the Assateague Channel to Chincoteague Island where an auction takes place to reduce their numbers. After a number of the foals are sold, the remaining herd swims back to Assateague a couple days later. These management techniques reduce the impact the horses pose to their natural environment and help provide a sustainable resource for future generations.

To find out more about the Annual Pony Swim, watch the video below.