Woman Nearly Dies After Meteorite Strikes Her Bed While Sleeping 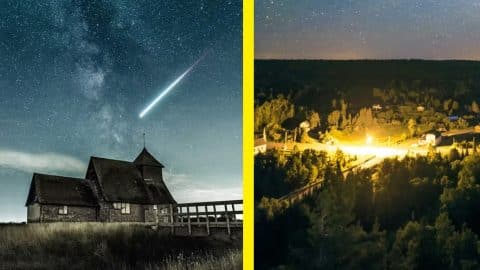 For one woman, her encounter with a star wasn’t quite what someone would hope for – and nearly took her life!

Ruth Hamilton, a British Columbia resident, was startled awake in early October 2021 when she heard a loud crash. Quickly, the noise was followed by dust landing on her face and a thud on the pillow next to her.

“I just jumped up and turned on the light, I couldn’t figure out what the heck had happened,” she explained to local news outlet Victoria News.

Ruth tried to sort out what in the galaxy was going on when she noticed a black rock poised neatly on the pillow next to where she lays her head at night.

A woman in British Columbia recently woke up to find a space rock on her pillow and a hole in her ceiling. Ruth Hamilton had been tucked up in bed asleep when a meteor came crashing through her bedroom ceiling, debris coating her face.

Both confused and stunned by the series of events, she phoned emergency services. A responding officer showed up and together they began to piece the events together – finally realizing that this was a meteorite that had blown a hole clear through her roof!

“We called the Canyon project to see if they were doing any blasting and they weren’t, but they did say they had seen a bright light in the sky that had exploded and caused some booms,” she noted of their investigation.

“I was shaking and scared when it happened, I thought someone had jumped in or it was a gun or something. It’s almost a relief when we realized it could only have fallen out of the sky.”

Luckily for Ruth, she had no injuries and all was fine in her home beyond the hole in the roof and bits of rock on her bedding!

“I’m just totally amazed over the fact that it is a star that came out of the sky, It’s maybe billions of years old,” she marveled.

Surprisingly – this isn’t the first time a sleeping woman has had a bizarre experience with a meteorite in North America.

In November 1954, a woman who was napping in her Alabama home woke up in a jolt as a meteorite crashed through her roof and struck her giant radio console (those were popular back then) and landed square on her abdomen!

To this day, she’s still the only known person to ever have been struck by a meteorite! Check out the full video below to learn more about her strange story.