By Manly Bryant on September 20, 2022
Advertisement 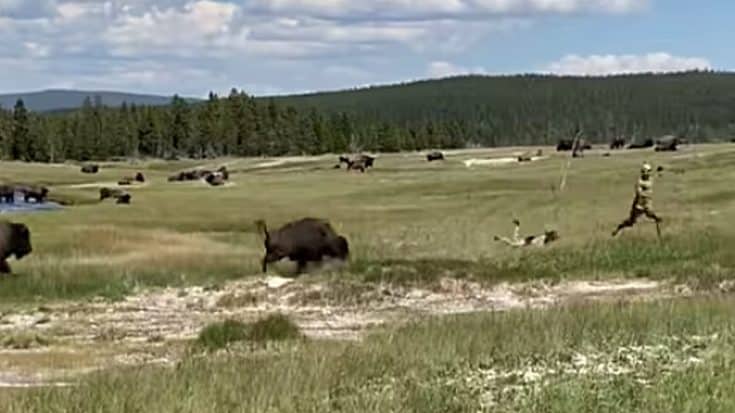 A woman was visiting Yellowstone National Park when she got too close to a bison and it charged at her. She tripped while running away from it and did something that most likely saved her life.

A video of the incident was filmed by an onlooker who happened to be at Nez Perce Creek in the Wyoming portion of Yellowstone, which spans neighboring Montana and Idaho.

The video shows two bison agitated and slowly charging toward a man and woman who got a little too close to the wild beast. As the bison got closer, it moved quicker, and it had its tail standing straight up during the full-blown charge.

The man was able to get away but the woman tripped over something in the field and landed right on her stomach and laid there. The bison ran right up to her and quickly sniffed her before taking a few steps back to investigate.

Onlookers off camera watched as the nightmarish scene unfolded screaming in fear that she might be trampled, “Play dead, play dead.”

The bison soon has enough and gallops away from the woman while other visitors run to her aid to make sure she is alright.

The woman who took the video, Cloie Musumecci, told local MTN News, that the woman who fell was a Montana local and she had to “play dead in that situation.”

Cloie said the woman survived the scary encounter “without a scratch.”

“Bison are wild animals that respond to threats by displaying aggressive behaviors like pawing the ground, snorting, bobbing their head, bellowing and raising their tail,” Yellowstone bison biologist Chris Geremia said, according to TODAY. “If that doesn’t make the threat (in this instance it was a person) move away, a threatened bison may charge.”

Watch Footage Of The Bison Charge Below