Woman Rescues Bobcat Thinking It Was A Kitten

By Jennifer Pernicano on September 26, 2019
Advertisement 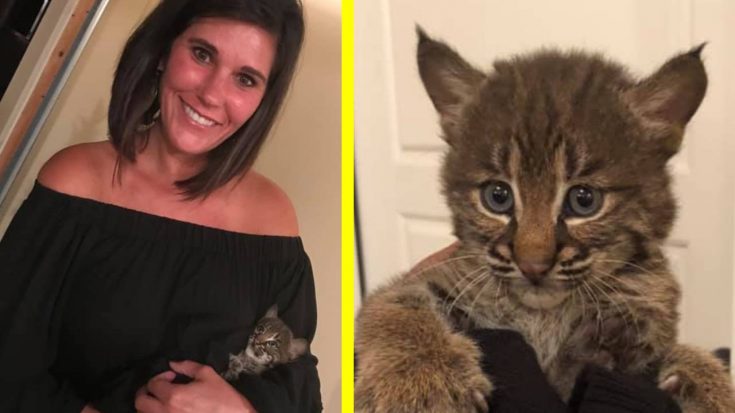 On September 20, 2019, a Tennessee woman named Jill Masengale Hicks pulled over when she saw an abandoned kitten on the side of the road. She got it situated in her garage with a litter box, cat food, and some water.

She also posted a photo of the kitten on Facebook asking if any of her friends were able to adopt it.

“Just found this kitten on the side of the road. He/she is a bobtail. It needs a loving home. Anyone?” she wrote.

Just found this kitten on the side of the road. He/she is a bobtail. It needs a loving home. Anyone?

Just hours later, she found out that she hadn’t actually saved a kitten like she thought. The kitten turned out to be a baby bobcat!

She invited her neighbor over to see the kitten, and the neighbor suggested that it was a baby bobcat. Good thing, because Jill planned on giving it a bath in the sink and sleeping with it in her bed! She posted an update to her friends saying, “Ok so never mind about rehoming this ‘kitten’ I found on the side of the road …apparently I rescued a baby bobcat ??‍♀️”

Ok so never mind about rehoming this “kitten” I found on the side of the road …apparently I rescued a baby bobcat ??‍♀️

She called a wildlife rescue called For Fox Sake and they have taken the bobcat, newly named Arwen, into their care.

Here’s Arwen, our famous bobkitten patient! She’s stolen hearts all over the world and a lot of people have been asking…

Posted by For Fox Sake Wildlife Rescue on Thursday, September 26, 2019

Jill’s initial post realizing it was a bobcat went completely viral, with over 27,000 shares and countless articles written.

To us, the cat looks clearly wild, but in one post she did say it only weight 10 ounces at the time she found it.

I am going to create Arwen her own FB page, but here are a couple of pictures from this morning. Her handler said she…

This isn’t the first time that has happened! In 2018, a Minnesota family rescued a baby bobcat thinking it was a kitten. Watch the news report about their situation below.