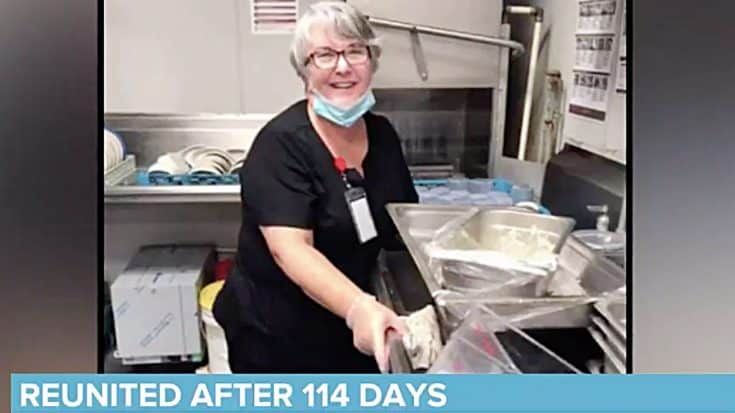 A beautiful story comes out of the dark times of the coronavirus pandemic in Jacksonville, Florida when a woman reportedly took a job as a dishwasher at the local nursing home to visit her husband who lived there.

When the virus hit in March, Rosecastle Assisted Living & Memory Care stopped allowing visitors, so for 114 days, 57-year-old Mary Daniel was separated from her husband, Steve Daniel, who was in there with Alzheimer’s.

She said it was extremely hard for him to have his routine, all of a sudden stop, and not understand why. He was used to having her there every day to watch TV with him and tuck him into bed each night. That was not allowed anymore. New COVID-19 lockdown guidelines prevented it.

She wasn’t able to FaceTime him because he wasn’t able to have a conversation and she tried to visit from outside his window but that didn’t work either, it just upset him so she was basically cut off. You could tell being separated was taking a toll on Steve.

By the grace of the good lord, one day, the care facility opened up applications for a dishwasher so Mary applied and told them she’d be the best dishwasher they’d ever had. To her delight, they hired her and gave her the clearance to go visit him after her work shift each day.

“I walked into his room and he said my name, he said Mary, which was a relief,” she told CBS News. “So when he said, Mary, and gave me the biggest hug, I mean, we both cried.”

The nurses say that Steve has been much more relaxed now that she has been able to visit him. Watch her give more details on the story in the interview video below!

REUNITED AT LAST: Mary Daniel took a dishwashing job at her husband’s assisted living facility just so she could see him. She tells @willganss what it was like to reunite after 114 long days.