By Miranda Raye on August 2, 2018
Advertisement 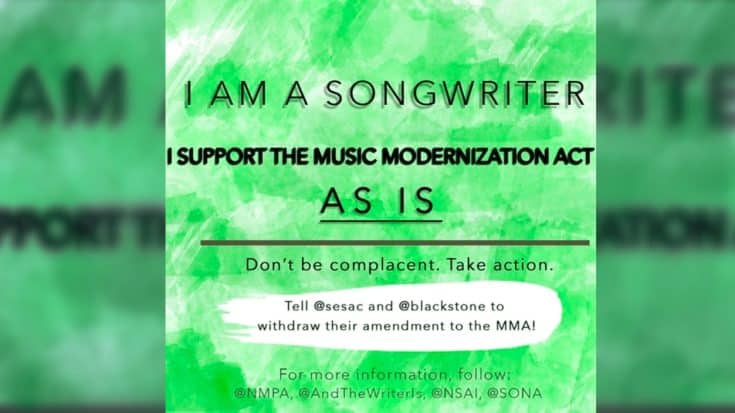 Over the course of the past few days, country fans’ social media feeds have been filled by identical images posted by their favorite artists. If you follow any country stars on social media, we’re sure you’ve seen one of these images in your feed.

Let’s advocate for the songwriter!!! This bill MUST pass! As is. No amendment. Please do the right thing @sesac @blackstone???

Variations of that image include the lines “I am an artist,” or “I am a manager” in place of the “I am a songwriter” part, but the rest of the image remains the same. So, what exactly is this Music Modernization Act that country artists seem to be so strongly against?

Rolling Stone describes the MMA as the “biggest attempt at music copyright overhaul in decades.” The act, which has already passed in the House of Representatives is currently up for vote in the Senate.

The thing all of your favorite artists are speaking out against is a proposed amendment to the MMA by performance-rights organization SESAC, which wants to implement “certified administrators” to work between them and other organizations when it comes to figuring out royalties.

This proposed amendment is quite controversial, since many artists support the MMA as it is. That’s why you’ve seen the same images start popping up on social media, as more and more stars speak out against the amendment.

I’m standing with all my fellow artists and songwriters. This is NOT COOL. The Music industry is changing everyday and the Music Modernization Act is gonna make sure songwriters and their families are being paid for songs they create that you LOVE in this new world of streaming. We need this to pass. Please tag @sesac and @blackstone to tell them to withdrawal their amendment to the MMA. Love you all so much, thank you.

Just a short list of the many stars who have spoken up against SESAC’s amendment include Travis Tritt, Old Dominion, Maren Morris, and Russell Dickerson. Scotty McCreery penned one of the most moving posts about the whole ordeal, sharing an “I am an artist” image along with his own message.

“So many incredible songwriters in Nashville and all around the country deserve to be able to make a living and feed their families by writing the songs that you know and love,” he wrote. “I support the MMA as is!”

So many incredible songwriters in Nashville and all around the country deserve to be able to make a living and feed their families by writing the songs that you know and love. I support the MMA as is! Yall help out by tagging @sesac and telling them to withdraw their amendment to the MMA! Songwriters have given us all so much.. now is your chance to help them! Much love yall, SM

So far, one of the biggest stars to speak out against the SESAC amendment is Luke Bryan. He shared an “I am a songwriter” image along with a simple message begging for the amendment to be withdrawn.

Now that Bryan has said something, it seems like only a matter of time before other major stars start to make their voices heard as well.

@sesac and @blackstone please withdraw your amendment to the MMA. Protect the songwriters and their songs.

So if you were wondering why you keep seeing all artists posting these similar images on social media, now you know. Fans like you can help by sharing the “I am a fan” image like the ones the artists and songwriters have been sharing, or by writing to your senator to pass the MMA as it is.

If the act passes, it will allow artists such as McCreery to get fair compensation for remarkable songs such as his new single, “This Is It,” which he wrote about his now-wife Gabi. Enjoy that song below.