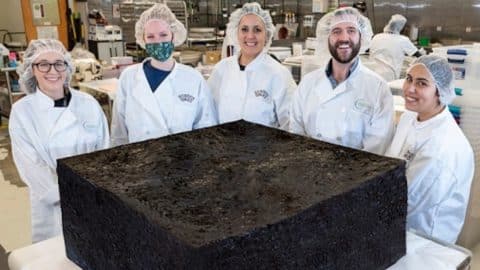 This isn’t your grandma’s brownie! A Massachusetts company has created a brownie unlike anything we’ve ever seen before.

Bubby’s Baked, a subsidiary company of MariMed Inc., located just outside of Boston, spent 24 hours to bake and prepare what they are claiming is the world’s largest cannabis-infused brownie. The “scrumptious monster” weighs in at a hefty 850 pounds and measures 3 feet wide and 3 feet long.

According to a press release issued by the company, the treat is infused with 20,000 mg of THC and was baked to celebrate the launch of Bubby’s Baked and its new line of chewy edibles.

“To commemorate the launch of Bubby’s, MariMed’s craft confectioners in Massachusetts baked a larger-than-life version of a Bubby’s soft-baked brownie that is believed to be the world’s largest THC-infused brownie ever made,” the statement reads.

The five-person team baked the pot brownie in a large commercial oven and hoped to shatter the Guinness World Record previous held by a 234 pound brownie baked in 2013 by Something Sweet Bake Shop in Daphne, Alabama. Guinness rejected the entry because they don’t accept cannabis related records. MariMed’s Chief Product Officer Ryan Crandall said that their team was disappointed to miss out on the official record, but was proud of what they accomplished.

The company hopes to sell the oversized brownie to a lucky patient once they determine a price and a buyer. For those in Massachusetts who aren’t in the market for a giant oversized pot brownie, the company offers other chewables.

“Inspired by the original cannabis-infused, homemade brownie, every delicious, soft, and chewy Bubby’s bite is made from scratch in small batches, and infused with precision-dosed, full spectrum cannabis,” the press release reads. “They’re perfect for sharing high times with friends this holiday season.”

The bite-sized goodies are available in brownie, chocolate chip and snickerdoodle flavors and are (unfortunately) available only in Massachusetts for the time being. But, their line is expected to expand to dispensaries in Delaware and Maryland in 2022.