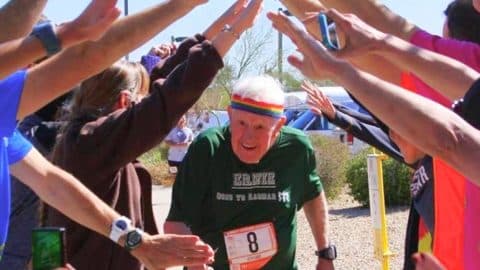 Ernie Andrus, a World War 2 veteran became the oldest person to run across America in 2016 when he was 93-years-old. Took him a whopping three years to conquer the incredibly long journey from San Diego, California to Saint Simons Island, Georgia, but he did it.

Now that he’s completed the run and is 95-years-old he’s opted into making the same run again. This time running back in the opposite direction, from Georgia to California. He says he’s decided to do it again because he normally runs 3 days a week and is getting bored with it. This time he says he expects the run to take 5 years to complete which he’ll finish right on time for his 100th birthday, setting a brand new record.

Ernie began his second run on March 16, 2019, and many people are following his progress via social media. Often posting on his Facebook page informing everyone of where he’s at, how he’s doing and giving little updates along the way.

According to CBSNews.com, he is dedicating his run to honor the LST military ship, the same kind of ship he served on when he was on active duty. This kind of ship has since been de-commissioned but you can take a tour of one in Evansville, Indiana.

“The ship is like a person to you. We call it the Great Lady.” Ernie told the report who then responded back with “Sounds like you’re in love with this lady.” Ernie answered “oh yeah, it’s part of my soul.”

Such an inspiration to see a man who’s almost 100 years old still chasing his dreams. Looking forward to seeing him finish in 2025 and setting the new world record.