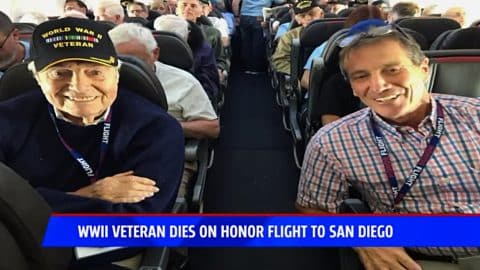 It was the trip of a lifetime for 95-year-old Army veteran Frank Manchel and his son Bruce Manchel got to accompany his father for it – which made it even more special.

The World War II veteran and his son took off from San Diego aboard a chartered American Airlines flight that was set up by Honor Flight – a nonprofit organization that gives WWII veterans an all-expenses-paid trip to visit Washington D.C. and the memorials and honors there.

A Michigan native, Manchel served as an Army technical sergeant during World War II and joined more than 80 other veterans for the amazing trip to see Washington D.C. His son joined as a guardian, and together they took off on Friday, May 3rd, 2019 with bright smiles and great excitement for the weekend ahead.

During their time in the nation’s capital, they visited the Lincoln Memorial, the World War II Memorial, Korean War Memorial, Air Force Memorial, and many other sites of historical significance. When Manchel’s 93-year-old brother and nephew came to visit them along with Manchel’s other son, Howard, that made the trip even more special.

After an amazing weekend, and truly the trip of a lifetime, Manchel and his son Bruce were on the way flight home when the unthinkable happened.

It was just an hour before the flight was scheduled to land back in San Diego, and Manchel had just signed a memorial book for one of the guardians on the flight. He stood up to go to the bathroom – and immediately collapsed in the aisle.

“The fella who caught my dad came up to me and said, ‘listen, your dad, within 5 seconds of having him in my arms was gone,’” his son, Bruce, told Fox 5 San Diego.

Chaplains prayed over Manchel’s body and he was draped in an American flag before being placed in a seat next to his son for the remainder of the flight. Shelley Zimmerman, former San Diego police chief, was on the flight as a guardian.

As the flight began to descend, she spoke to Bruce Manchel and said: “If you are up to this – to honor your father, let’s sing ‘God Bless America’.”

Within seconds the entire plane filled with an emotional and heart-wrenching tribute to the late veteran as everyone on the flight sang the patriotic song in unison.

Manchel’s son, Bruce, is also the family spokesperson and issued the following statement regarding the passing of his dad.

“Frank Manchel was so excited to go on Honor Flight. To be with both of his sons as well as his 93-year-old brother who met him in Washington, D.C. was so special. My father’s passing was the ending to the most amazing weekend, surrounded by his newest best friends. We thank all of you – Honor Flight San Diego, American Airlines, San Diego International airport, friends, and supporters for your concern and for allowing the weekend to be so special for all of us to share together. Frank passed quickly and peacefully and the compassion and respect that that was shown to our family will be treasured always. May he rest in peace as he is now with his other beloved son Jimmy.”

As the veterans exited the plane, each and every one of them stopped to salute Manchel in a final honor to him. The family is planning services to be held in Michigan in the coming days and American Airlines has not only offered their condolences to the family but also has offered to fly Manchel to his final resting place. Additionally, they will fly his family members to and from the services at no cost to them.

Our thoughts and prayers are with the Manchel family in their time of great loss and we thank Frank Manchel for his service to our great country.

Watch the full report from Fox 5 San Diego below.