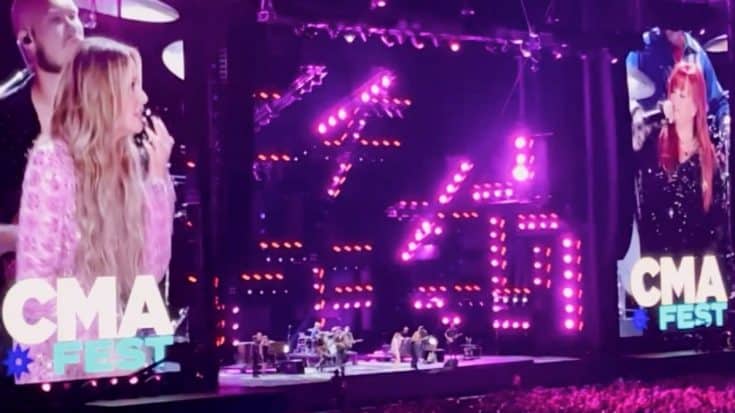 You can always count on a few surprises at CMA Fest. The annual country music festival in Nashville, Tennessee draws in country fans from far and wide. Dozens of artists perform during the festival, from up-and-coming singers to iconic Hall of Famers.

Since the festival is such a big deal, artists will pull out all the stops to make sure their fans have the time of their lives. That’s exactly what Carly Pearce did during her set at CMA Fest this year.

Pearce surprised the thousands of fans who turned out to watch her performance by welcoming a surprise duet partner to the stage…Wynonna Judd.

This surprise performance was also a tribute to Wynonna’s mother and singing parter, Naomi, who passed on April 30.

The day after Naomi passed, The Judds were inducted into the Country Music Hall of Fame. Wynonna attended the ceremony and watched Carly sing The Judds’ “Grandpa” in their honor.

Carly later sang “Why Not Me” during a service held in tribute to Naomi at the Ryman Auditorium. The service was broadcast on CMT.

When Carly welcomed Wynonna onstage at CMA Fest, “Why Not Me” was the song they performed together. Wynonna thanked the fans for being so wonderful to her:

“Friday night at Nissan Stadium was the most amazing celebration of Judds music,” Wynonna wrote on social media. “70,000 people singing the words to ‘Why Not Me’ back to us, WOW. Country music fans really ARE the most loyal!!!! I’m grateful to still have a seat at the table.”

A few fans filmed Carly and Wynonna’s collaboration and shared the videos online. You can watch one of those videos below.

It warms our hearts to see artists like Carly continuing to keep The Judds’ legacy alive by sharing their songs.