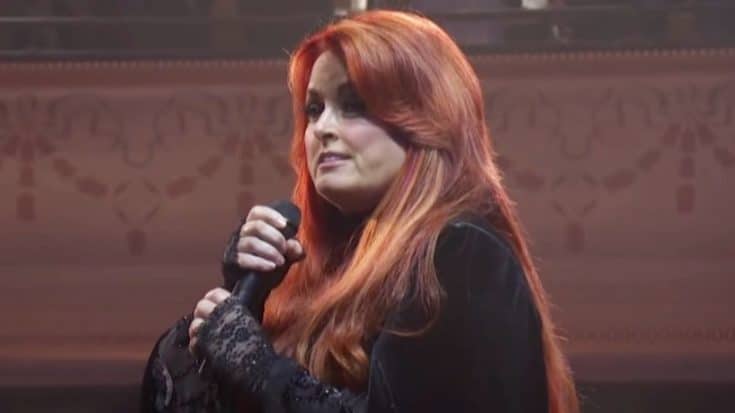 The Judds‘ Naomi Judd died on April 30 at the age of 76. Her daughters, Wynonna and Ashley, released a statement saying they “lost [their] beautiful mother to the disease of mental illness.”

Naomi was always open about her struggles with her mental health. She detailed those struggles in her 2016 memoir, River of Time: My Descent into Depression and How I Emerged with Hope.

That book was named after one of The Judds’ songs, “River of Time.” It was also the name given to the public memorial service on May 15 that honored Naomi’s life and legacy.

The service was held at the Ryman Auditorium in Nashville. It was broadcast live on CMT without commercial interruptions.

One of the songs Wynonna performed was “The Rose,” which was originally recorded by Bette Midler. Conway Twitty later released a popular cover of the tune.

Wynonna joined Brandi Carlile to sing “The Rose” during Naomi’s memorial. You could feel the emotions between the two singers as they poured their hearts into their performance.

One week after the memorial, Wynonna took to social media to open up about how she felt during the service. She specifically referenced her duet with Brandi in her post.

“A week later & still reflecting on this special performance with @brandicarlile,” Wynonna said alongside a clip of her and Brandi singing together. “An incredibly emotional night, little sleep, voice tired, though my spirit felt so strong. I gave everything I had.”

On top of singing “The Rose,” Wynonna also performed “River of Time” and closed the service with “Love Can Build a Bridge.” Watch the latter performance below.

If you or someone you know is experiencing suicidal thoughts, please contact the National Suicide Prevention Lifeline at 1-800-273-8255, text “TALK ” to 741-741, or visit suicidepreventionlifeline.org.