By Miranda Raye on November 30, 2022
Advertisement 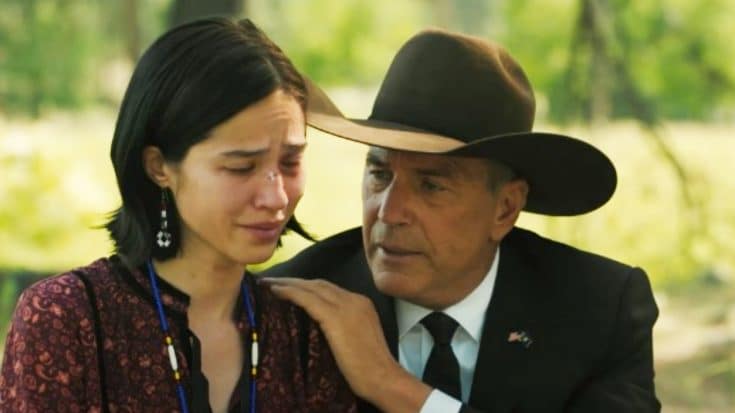 Episode 4 of Yellowstone‘s fifth season aired on Sunday (November 27). Titled “Horses in Heaven,” the episode featured what may be one of the most emotional scenes in the series’ history.

We won’t spoil the exact context of the scene here, just in case you still need to watch the episode. But we will say it was between John Dutton (Kevin Costner) and his daughter-in-law Monica Dutton (Kelsey Asbille).

During their conversation, John reveals a sad family secret he never told anyone else. This secret allows him to connect to Monica while she’s deep in grief.

Honestly there is no way they could have made this a better scene. John Dutton knows that Monica isn’t the biggest fan of him but he still offered her comfort and shared something extremely personal with her. pic.twitter.com/x8mC82NwTa

In a behind-the-scenes video about “Horses in Heaven,” Asbille shared her emotional reaction when she read that scene between Monica and John for the first time. She said:

“It’s funny, I told [show creator] Taylor [Sheridan] I read that scene with John and Monica on a plane and just started bawling.”

Viewers also had an emotional response when they watched John and Monica’s scenes. Here are just a few of the responses in the comments section of the behind-the-scenes video on YouTube:

“The John/Monica scene gutted me! I cried so hard last night.”

“I love that scene with John comforting Monica…Just a reminder that John is in fact the rock of the family always, hard and rough and sometimes even cold around the edges. But when his children need him, he’ll always be there to hold them like a rock.”

“What John said to Monica really touched my heart.”

“John and Monica’s scene reminded me of Elsa and Shea on 1883, if anyone else watched it. Both very powerful.“

Look below to watch Asbille talk about her own reaction to that scene between John and Monica. But if you haven’t watched “Horses in Heaven”, be warned, because the video does spoil the episode’s events.