Yellowstone Bystanders Scolded For Standing Too Close To Bison 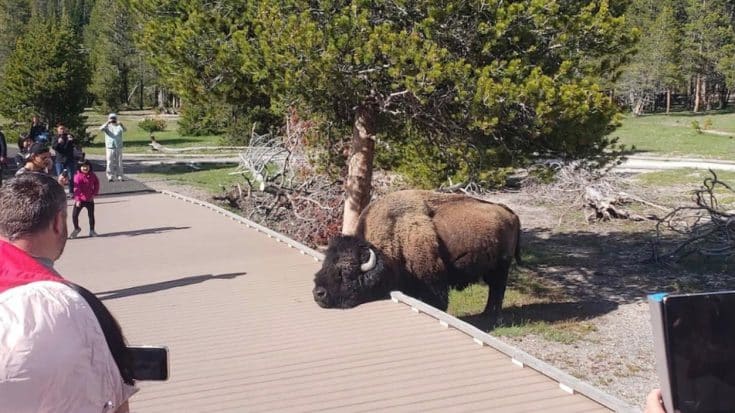 Yellowstone National Park tourists were enjoying their time at the park when they witnessed a bison lay its massive head down on a boardwalk and used it as a chin scratcher.

Photos taken by bystanders showed just how dangerously close the animal got to the many people who were on the boardwalk watching it.

Park officials said the encounter happened on June 7 (2022) near Old Faithful just a week after a tourist was gored by a bison and tossed ten feet into the air. The woman in that situation was hospitalized with serious injuries.

Ken Carleton was visiting Yellowstone with his family and was walking across the boardwalk when he spotted the bison and started taking photos. Ken later posted those photos to Facebook where they received some good and bad attention.

Yellowstone spokeswoman Linda Veress told Cowboy State Daily that everyone in Ken’s photos was taken close to the wild animal, including the photographer himself.

“If wildlife are on or near a boardwalk in a thermal area within 25 yards (from wildlife such as bison or elk) and 100 yards (for bears and wolves) [of a person], people should move away to maintain that distance,” Linda said. “On a boardwalk, they should go back the way they came and wait for the animal to leave. All of the people in the Facebook photo[s] were much too close and this was an unsafe situation. The animals in Yellowstone are wild and unpredictable, no matter how calm they appear to be, and bison can run three times faster than people.”

Ken was visiting from Washington State with his wife and son and said he learned a valuable lesson that day.

“We were all caught in the moment,” he told FTW Outdoors. “It was like the bison was showing off. It was very easy to forget, at that moment, about any danger.”

Ken explained that, initially, the bison was 50 feet from the boardwalk grazing on some grass. Then, all of a sudden, the bison moved directly toward the boardwalk and split the tourist into two groups.

Some tried to quickly walk forward to stay ahead of the animal while others stopped walking altogether to stay behind it. That’s when another bison came from behind them and trapped the tourists on the boardwalk.

In a rarely observed behavior, people watched as the first bison walked up to the boardwalk and scratched its own chin.

Ken told FTW Outdoors, “The bison ended up waking around the tree and bushes back toward the trail that came from the river, away from me. That allowed the people who were trapped to continue toward me. Both bison crossed over toward Old Faithful. We moved on, into the lodge to the gift shop.”

Ken added that he was surprised at how quickly the situation quickly went from being safe to unsafe and that he’ll certainly be more aware when in the park on his next visit.