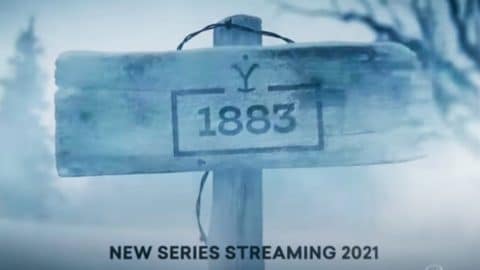 In early February, it was announced that a prequel series to Yellowstone is in the works. Titled Y: 1883, the series will follow the Dutton family’s ancestors on their journey across the American West.

A press released described the prequel series as being “ a stark retelling of Western expansion, and an intense study of one family fleeing poverty to seek a better future in America’s promised land—Montana.”

Viewers were later introduced to the prequel when a teaser clip aired during the Super Bowl. The short clip showed nothing more than a wooden sign with the series’ logo.

A unrecognizable voice spoke a single line, saying, “I don’t care if you live or die, but should you live, you tell them about me.”

The teaser also revealed that the new series will premiere on the streaming service Paramount+ later in 2021.

Other than that, little is known about this upcoming addition to Yellowstone‘s story. Fans finally got a few new tidbits of information about the prequel series through a video shared to Yellowstone‘s and Paramount’s social media profiles.

The clip contains an interview with Yellowstone co-creator Taylor Sheridan. He talks about multiple new series he’s working on for Paramount, including Y: 1883.

Sheridan offers some new details about the series, saying it “…explores different eras of that hundred and thirty year legacy. What an opportunity to witness the first Duttons that come to Montana. And we see them when they were homesteading.”

He spoke further about the Duttons’ trek out West, saying, “When we say the Wild West, what that really means is a West beyond the reach of the rule of law. It really is the beginning of an empire before it was an empire.”

A few clips play as Sheridan is speaking that look like they’re from the prequel series. Of course, the clips are short and you can’t see anyone’s faces to be able to identify who the actors are.

Still, this video offers a first look at the series, which is exciting! Check it out below.