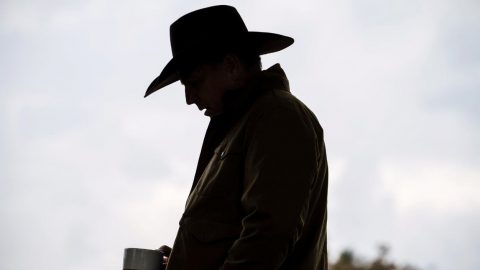 After an excruciatingly long wait, Yellowstone‘s fourth season will finally debut on November 7. The show has been hyping up its return through a series of ominous teaser clips and images, including taglines such as “Every. Body. Pays.” and “Revenge is worth the wait.”

The official Season 4 trailer was released at the beginning of September. The action-packed clip makes it clear that some serious events are about to go down in the show’s new season.

As you may recall, Yellowstone‘s third season ended on a cliffhanger. The fates of John, Beth, and Kayce Dutton were left in the air after they were all caught in dangerous situations.

Since we don’t know if the three Duttons survived their respective predicaments, the Season 4 trailer and teasers play off of that uncertainty. And one of the show’s newest teasers has left fans with even more questions.

The show shared a short clip featuring the image of Kayce and Monica Dutton’s son, Tate. A mysterious tagline accompanies the image, and reads, “I’m not done.” There is a lot of speculation as to what this tagline could mean in relation to Tate.

The youngster is John Dutton’s grandson, and they were developing a closer bond by the end of Season 3. So maybe Tate was just starting to see himself as his grandfather’s successor on the ranch. Now that John is seriously injured (or perhaps has passed away), Tate may see himself as the one who will have to step up and keep his legacy alive. Therefore, he’s not “done” carrying on the Dutton name.

Check out the mysterious teaser with Tate below. What do y’all think it means?