By Miranda Raye on July 6, 2022
Advertisement 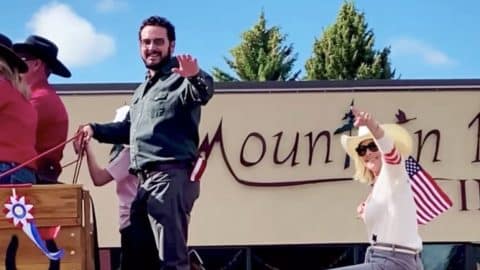 Yellowstone star Cole Hauser took a break from filming Season 5 to join his family in a 4th of July parade in Cody, Wyoming. The theme of the parade was “Yellowstone: 150 Years of Wild and Wonder,” so it seemed fitting to have Cole serve as the Grand Marshal!

Cole was joined by his wife, Cynthia, and their nine-year-old daughter Steely Rose. The family traveled down the parade route on a horse-drawn wagon. They waved American flags as they rode past the crowd.

At one point, Cole got off of the wagon to greet some of the people who were watching the parade. He specifically made his way over to the residents of the Powell Valley Care Center.

“Cole Hauser the parade Grand Marshal and star of Yellowstone came off his float and shook the hands of our residents on Monday! It was an amazing experience!” the Powell Valley Care Center wrote on Facebook. They also shared some photos of Cole greeting the Care Center’s residents.

Others shared videos of Cole at the parade:

“This right here was something pretty special,” Rick Larson said about Cole getting off the wagon to interact with spectators. “But I wasn’t prepared for it never seen this coming. But what a very nice gesture. Well played sir I am now a fan.”

Rick shared a video of Cole speaking with the residents from the Powell Valley Care Center, and it’s touching to see.

Cedar Jasso also praised Cole for being so kind to the residents, saying:

“Cole Hauser (“Rip” from Yellowstone) as the Grand Marshall in my home town. Not many I’ve seen that will actually get down and interact with the spectators. Pretty cool of him!”

Cody Enterprise shared another video of Cole and his family traveling along the parade route, which you can watch below. We hope they had a great 4th of July!