By Jennifer Pernicano on December 6, 2021
Advertisement 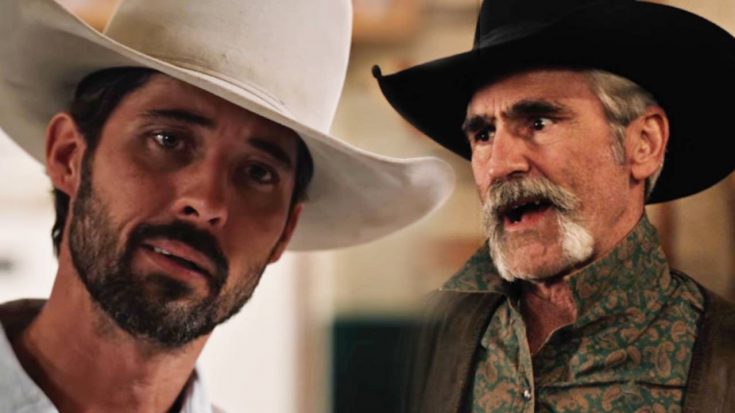 Sunday, December 5th aired the 6th episode of Yellowstone‘s riveting fourth season. So much happened, so we broke it all down for you:

The episode opens with Beth asking Rip to take her on a long horseback ride. She adds that she hasn’t been able to get in contact with her dad, so she decides to go to his house that morning to check up on him. There, she walks in on Summer Hastings, the woman from Episode 5 that John Dutton brought home after bailing out of jail, wearing nothing but one of John’s shirts.

Beth grabbed a kitchen knife and Summer held out the quart of milk she was holding as her shield. John walked in and said, “Here’s a situation I couldn’t-a dreamed up in a month of Sundays.”

Beth and Summer exchanged a few digs, but of course, Beth got in the last word before they all sat down for breakfast. But not before Summer grabbed John’s face and kissed him. John assured his daughter they stayed up late talking and he lent her a shirt because her clothes still smelled like pepper spray from the protest. After a short breakfast, Summer told Beth, “I hope you find a therapist who can help you.” Beth leaned down to her and said, “I hope you die of ass cancer.” Summer sighed, “And the cowboy fantasy’s officially over.”

Kayce, Monica, and Tate were looking at the property Monica found online, hoping to make it their new home. It had lots of land, a beautiful house with a wrap-around porch, and a stray dog seemed to come with it! While Tate and the dog bonded, Monica toured the inside of the house, and Kayce just took in the views from the porch.

A real Kayce smile. We love to see it. #YellowstoneTV pic.twitter.com/FOnXKvHeLx

Kayce informed the realtor that they’d take the house and the dog, who Tate later on revealed he has been calling “Dog,” but will find a name for him later.

Next, we see Jamie getting the confidence to confront his birth father, Garrett Randall, about the attempted murder on the Dutton family. He not only confronts him verbally, but does it at gunpoint.

Garrett admits to hiring his former prison cell mate, Riggins, to orchestrate all the attacks on the Duttons and told Jamie that they are not his real family, and Jamie wouldn’t miss any of them. “I’d miss my brother,” Jamie says. Garrett plays mind games and says that Kayce is not his brother. Garrett explained to Jamie that John just used him his entire life, just like he used the rest of his children to get what he wants. He also said that Garrett was the one who gave Jamie the strength to forge out on his own and buy the ranch they were standing in. Garrett did admit to ordering the hit on the Duttons and said, “And I’ll keep trying till I get it right. That’s how much I love you.”

Jamie broke down crying and embraced his birth father.

While looking at their new house, Kayce gets a call from Thomas Rainwater about stolen horses on the reservation. After checking out the land with Rainwater and Mo, Kayce deduces that the thieves were on dirt bikes. He goes to the house on the property to get descriptions of the stolen and finds that Avery, the attractive female wrangler that once worked at the Yellowstone while Kayce was residing in the bunkhouse, lives there. Monica notices the eyes they make at each other and asks who she is. Tate calls her a “hot tamale.”

At the Yellowstone ranch, Lloyd is teaching Carter how to rope and they are talking about why Carter is still sleeping in the barn. He says that he apologized to Beth and Lloyd suggests the young boy try it in a different way. Carter tells Lloyd to take his own advice and apologize to whoever it is in the bunkhouse he is at odds with, but Lloyd makes it clear: he never apologized.

Lloyd returns to the bunkhouse, pissed off of course, and sees everyone around the table, with Walker playing guitar and barrel racer Laramie all over him. Lloyd snatches the guitar away and smashes it against one of the beds. Everyone starts yelling and Lloyd chastises Ryan for being on Walker’s side even though Ryan has known Lloyd since he came to the ranch at 18 years old and has only known Walker a year. Lloyd then takes out a knife and stabs Walker in the chest. Ryan and Colby wrestle with Lloyd and put him in a sleeper hold. Mia was packing her stuff through this entire scene and finally leaves the ranch, telling Laramie, “F&*% this place.”

A vet is onsite and gets called to tend to Walker’s stab wound. Luckily, it didn’t hit his lungs but when the vet tries to take it out he thinks it hit a bone. Wanting to double check the x-ray, the vet pauses but Walker screams for someone to pull it out. Laramie yanks it out for them.

As this is going on, Rip and Beth are having a special moment, deciding on where to get married – which means it’ll likely be soon! Beth wants to get married at a place where they have no memories and Rip says he knows exactly where to do it. A vehicle pulls up, and not knowing who it is, Rip goes outside with a gun. He sees Lloyd and handcuffs. The next scene, John is there as well and tells Rip that Lloyd and Walker have one chance to squash their beef and Rip has to “make an example” of whoever is the last man standing.

John also said to get rid of all the women in the bunkhouse, including Teeter (nooooo!). Rip tried to save Teeter, saying she’s a good ranch hand and never started any drama, but John doubled down and said “no women at all.”

The next morning, Rip fires Laramie and Teeter, who gives Laramie a mean look, seeing as this was all her fault. He also tells all the guys to come outside and that Lloyd and Walker will be ending this once and for all.

Carter sees them start to fight and begins to walk away, but Rip makes him watch, telling him, “The only painless way to learn this lesson is to watch it.”

They fight for hours, it seems. When John shows up, Rip says that Walker has been done for an hour, but Lloyd will never give up. John goes into the “ring” to make an example of Lloyd, but Rip assures him everyone will hate him if he does it. ” “It’s my job — I’ll do it,” he says.

Rip goes up to Lloyd, and they hug. He tells Lloyd he loves him and then beats the ever living shit out of him. As Lloyd is down on the ground, Rip tells him this is for his own safety. Lloyd nods. Rip then kicks Lloyd’s hand, breaking a couple fingers. Lloyd goes to help Walker up, officially ending their fight. John addresses them both, saying this better not happen again, and if it does, they both know what happens. As John walks away, Carter tells Jake he realizes what he wants to be when he grows up. “I want to be him,” pointing at John.

Rip goes around the barn and breaks down.= because of what he just had to do to his best friend.

Finally, Jamie is at his office for his 9am meeting with the new head of operations of Market Equities, not knowing who now holds that position. He walks into the conference room to Beth smoking a cigarette with her feet on the table. After exchanging a few words, he realizes Beth’s plan is to completely derail his.

We see Jimmy at the Four Sixes this episode and after a bit of cowboying, he is told he needs to learn how to rope and the episode ends with him trying to do just that.

See a behind the story video on this episode below.