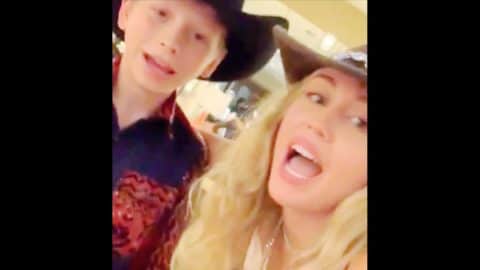 For many weeks in 2019, the number one song in the country was “Old Town Road” by Lil Nas X, with country singer Billy Ray Cyrus on featured vocals.

The song has taken the music world by storm, with artists of all genres offering up their own renditions for fans to enjoy. Since it has a country tie-in through Billy Ray, the track has been covered by a number of country artists, including Jessie James Decker, Keith Urban, and Caleb Lee Hutchinson.

Lil Nas X himself has reimagined the song many times. In fact, his now-hit version of the song that features Billy Ray is actually a remix!

Another one of the song’s many remixes features Billy Ray, Young Thug, and the famous Walmart “yodel boy” Mason Ramsey.

Mason found instant fame back in 2018 after a video of him yodeling along to Hank Williams‘ “Lovesick Blues” in Walmart went viral. He was almost instantly signed to a record deal, and has since found himself at home in the music industry.

At the young age of 13, Mason can already say that he’s appeared on the Grand Ole Opry stage. He recently shared that famous stage with Billy Ray, and as expected, the two delivered an “Old Town Road” duet to please the crowd.

But Mason also sang another “Old Town Road” duet behind the scenes. Backstage, he was joined by Billy Ray’s daughter Miley Cyrus, who is a superstar singer in her own right.

The pair filmed a short clip of themselves singing “Old Town Road,” and it is quite delightful to watch.

I’m gonna take @lilhankwilliams to the old town road …. cause he can’t drive yet 🚗 🐎

Lil Nas X has said that the remix of “Old Town Road” featuring Mason would be the final one. But after he hears this, he may want to make one more remix featuring Miley!

If you haven’t had enough, go ahead and watch Mason sing “Old Town” road with Billy Ray on the Opry stage by tuning in to the clip below.