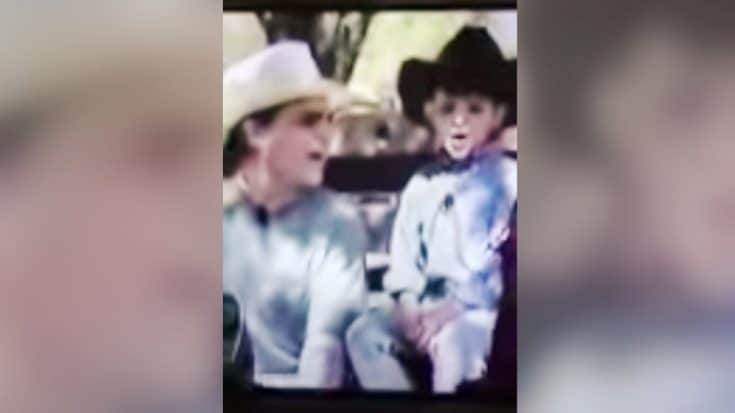 Here’s a little fun fact y’all may not have known. Thomas Rhett‘s dad is Rhett Akins, the country singer/songwriter behind 90s hits such as “Don’t Get Me Started” and “That Ain’t My Truck.” In addition to scoring his own hits, Rhett has penned chart-topping songs for other artists such as “Dirt on My Boots” and “Boys ‘Round Here.”

Thomas went on to follow in his dad’s musical footsteps. The father-son duo often collaborates, and even released a song together in 2017 called “Drink a Little Beer.”

Rhett and Thomas have been working together since Thomas was just a kid. In 2013, Thomas posted a throwback clip on his official YouTube channel that shows him singing with his dad some time in the 1990s.

Father and son delivered a cover of Joe Diffie‘s “Third Rock from the Sun,” which Diffie released on the Fourth of July in 1994. The song was a smash hit, and claimed the top spot on the country charts in both the U.S. and Canada.

Thomas took the lead when he and his dad covered “Third Rock from the Sun” all those years ago. The clip Thomas shared of their performance isn’t the best quality, but it is still clear enough to show how talented and confident he already was at such a young age.

Young Thomas donned a black cowboy hat and a collared denim shirt as he sang. Rhett jumped in every now and then with some vocal contributions, but mainly served as his son’s guitar player throughout the performance.

Tune in to the clip below to see Thomas and Rhett’s throwback cover of “Third Rock from the Sun.” Who would have thought back then that Thomas would go on to become a major country star just like his dad?