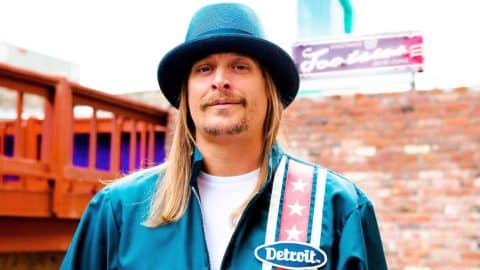 Robert James Ritchie burst onto the music scene as part of the hip hop group The Beast Crew in the late 1980s. His friends knew him as Bob, but that’s when the world was introduced to Kid Rock, a stage name he made up for himself. He was signed to Jive Records at 17 years old and released his debut album Grits Sandwiches for Breakfast in 1990.

1991 photo of @KidRock in @Freep studio after release of "Grits Sandwiches for Breakfast" http://t.co/8p49lNCs2S pic.twitter.com/ToVEsljWqc

Over the next two decades, Kid Rock solidified himself as one of the most well-known musicians in the world. He can rap, he can sing, and he can play every instrument in his backing band. Since his 1990 debut, he has released nine more albums including 2017’s Sweet Southern Sugar, which may just be his best work yet. Take a listen to one of our favorite songs from that album below.

Kid Rock has lived most of his life in the public eye, which is why it’s so surprising that there are some facts about him that some fans don’t know! We’re sure there are lots of things he keeps private, but here are five things you probably don’t know about Kid Rock!

1. Limp Bizkit Taught Him How NOT To Treat People

Limp Bizkit is a rap/rock band consisting of Fred Durst, Sam Rivers, John Otto, DJ Lethal, and Wes Borland. In the late 1990s, Kid Rock opened for the band and did not like what he saw behind the scenes.

“I always told my band, ‘You see how Limp Bizkit treats their roadies? We don’t do that. These people are helping us. They’re not trying to harm us. We’re all working together’,” he told Rolling Stone in 2015.

“Then we saw Metallica, and they treat their people great,” he continued. “We want to be like them. We want to treat everybody good. Don’t spit on people. Don’t throw microphones at them. Don’t get pissed off. We want to go a long way, and that’s not how you treat people. I had been in the trenches for a lot of years. I was like, ‘Let’s not [mess] this up by being brats. I’ll be a brat on the stage. When we get off, we treat them like they’re part of our family. And luckily, I was right. ‘Cause that helped. You see who’s still standing.”

2. His Childhood Was Not What You Think

Kid Rock’s song “Cowboy” may include the lyrics, “I ain’t straight outta Compton, I’m straight out the trailer,” but he did not grow up in a trailer. In fact, his parents owned a six-acre estate that had a swimming pool, tennis courts, an apple orchard, and horses!

3. Despite His Fame And Success, He Lives In A Double-Wide Trailer

In an interview with Dan Rather, Kid Rock, who is worth $80 million, revealed that he chooses to live in a a trailer.

“I live in a double-wide trailer. It’s not like I require a lot. You know, I’ve learned to downsize through the years and it really made me more happy. I’ll sell everything and live in that double-wide but I’m not givin’ up that airplane,” he said.

Although he lives in a trailer, he still loves luxury. He has a private airplane and an airstrip just beyond his land he resides on.

“You see a lot of people in my business. You go to these houses and I go where do you start in this thing? Like, how many times do you use the movie theater? I’ve built one. I maybe went in there once. Usually, because I was too drunk and couldn’t find the bedroom. It’s just like a freakin maintenance nightmare,” he said. “I’m just figuring out what really makes me happy and I’d rather have land and things of this nature and maybe some cool cars and my plane of course and stuff like that… and really not have any worries. You don’t have to worry if things are gonna go south.”

He is not even 50 years old yet, but he is, in fact, a grandfather! Actually, he became one in 2015. He and his longtime girlfriend Kelley Russell had a son, Robert James Ritchie, Jr. in 1993.

“I’m 43 and about to become a grandfather,” he told The Guardian. “But it keeps my redneck street cred up. I could be a great-great-great-grandfather by the time I’m 80. I am excited, but also nervous for my son. He was dropped on my doorstep at six months when I had no money and was trying to be a rock star. I didn’t have a clue.”

Kid Rock doesn’t often share photos of his family, but he did in December 2018 when he and his granddaughter were in the Leipers Fork, Tennessee Christmas parade.

Country singer Jamey Johnson admitted to Rolling Stone that “we got him hooked on golf now.”

“Bobby will go out and I mean, he’s a golfer. He might hit a bad shot now and then. I ain’t saying he’s Tiger Woods or nothing, but when he goes out to play, he wants to accomplish something,” he said.

And accomplish he does! According to this news report, he won a ProAm golf tournament one year, and sunk a 40-foot putt in front of golf legend Jack Nicklaus. Watch that putt below.

Did any of these facts surprise you? Let us know in the comments!