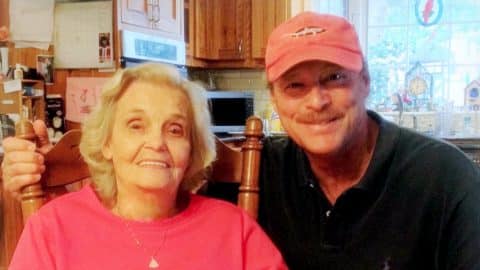 Alan Jackson‘s beloved mother, Ruth, passed away at her home in Newnan, Georgia on January 7, 2017. She was 86 years old.

“Mrs. Jackson became a celebrated part of son Alan Jackson’s career and life story as the inspiration behind some of his fans’ favorite music,” read a statement on Alan’s social media pages announcing Ruth’s death.

The Newnan Times-Herald published an article about Mama Ruth’s funeral. It detailed what Alan and his siblings had to say about their mother’s life and death.

When Alan’s father, Joseph Eugene, passed away 17 years prior, he wrote a song for him that went on to become “Drive (For Daddy Gene).” So the day before his mother’s funeral, Alan wrote a song for her as well.

The Newnan Times-Herald said this song was called “Where Her Heart Has Always Been.” The publication relayed how Alan said singing the song at his mama’s service was his “toughest gig yet.”

Now, four years after Ruth passed away, Alan is finally sharing “Where Her Heart Has Always Been” with the world. The song is featured on his upcoming album, Where Have You Gone.

“Where Her Heart Has Always Been” opens with a clip of Mama Ruth reading from her Bible. Then, it transitions into Alan’s performance.

Alan sings about the day of his mother’s death, saying, “A peaceful sound was calling low
‘It’s time to go.'” In the chorus, he sings about his mama’s arrival in heaven:

“And now she’s dancing in the wind, with her true love again. Where her heart has always been.”

The heartbreaking song is sure to resonate with anyone who has lost a loved one, especially a parent. Listen to it in the clip below.

You can hear Alan’s grief in each note of this song. We’re sure he misses his mama terribly.