By Miranda Raye on April 26, 2018
Advertisement 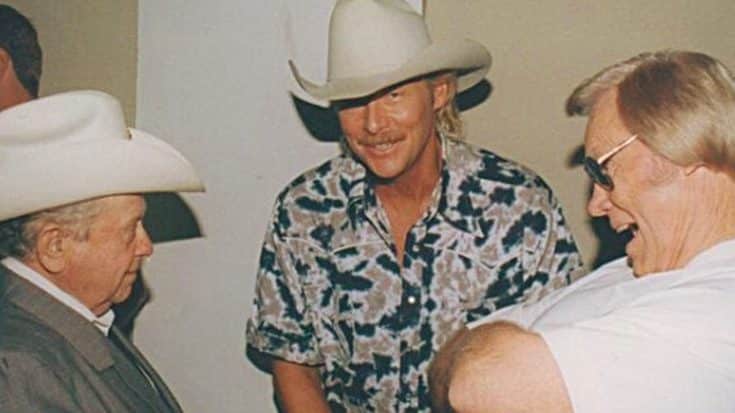 Even though George Jones and Alan Jackson‘s careers took off in different eras, the two understood each other more than some of their peers. That’s because Jackson grew up listening to Jones and other artists like him, and developed an immense respect for classic and traditional country music.

As two of the biggest names in the industry, it was inevitable that Jones and Jackson would eventually cross paths. Once they did, they developed a friendship that lasted for years.

The two collaborated many times, perhaps most notably on the song “A Good Year for the Roses.” Jones originally released the song in 1970, but recorded a new version with Jackson in 1994.

A few years later, Jones was invited to sing his song “Choices” at the CMA Awards but refused to do so when he was told he would have to perform a shortened version. Jones didn’t even attend the show, opting instead to watch from home.

As he watched, he saw Jackson take to the stage and perform a shortened version of his own hit, “Pop a Top.” Then, without any word, Jackson moved into the chorus of “Choices,” giving Jones and his song the recognition he felt they deserved.

To the country music community and fans, it was a subtle protest. To Jones, it was an extreme show of friendship. Watching from home, he cried when Jackson sang “Choices” for him.

As you would expect, Jackson was devastated when Jones passed away on April 26, 2013 at the age of 81. Now, years after the country legend’s death, Jackson still misses Jones just as much as ever.

In remembrance of Jones, Jackson took to social media to share an old photo he found of the two of them together. You can tell that the photo was from many years ago just by looking at Jones and Jackson.

No matter how much time passes, Jackson’s greatest tribute will always be his performance of that very song during Jones’ funeral service. Standing in front of the mourners that filled in the Opry, Jackson poured raw emotion into every word he sang.

His performance was so touching that the entire audience was left in tears. In fact, Jackson had tears in his own eyes by the time he was through singing.

You can watch Jackson perform “He Stopped Loving Her Today” at Jones’ funeral in the video below.

He’s right…no matter how long Jones has been gone, he will always be loved.