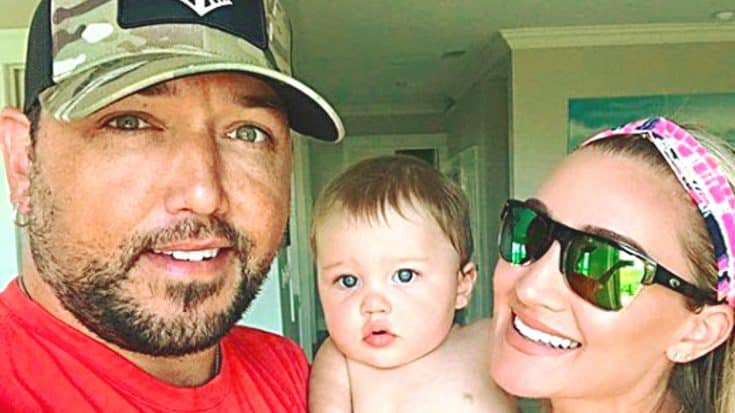 Jason Aldean may live in Tennessee now, but he will always be a Georgia boy at heart. Even if you didn’t know that Jason is from Georgia, it’s hard to miss the fact that he’s a huge fan of the state’s sports teams.

Whether it be the Georgia Bulldogs or the Atlanta Braves, Jason can often be caught proudly sporting the colors of his home state’s teams. He’s even managed to recruit his entire family into doing the same, except for wife Brittany, who’s a die-hard fan of the University of Alabama.

Jason is such a big Bulldogs fan that he had his baby boy, Memphis, wearing a Bulldogs onesie the day after his birth. That obviously made for a photo-worthy moment, and Jason shared the snapshot on Instagram.

Standing front and center while holding his son, Jason beamed at the camera while his daughters Keeley and Kendyl (both also wearing Bulldogs attire) stood by him and Brittany.

Cheering on the Dawgs from the hospital with the newest member of Dawg Nation. #secchampionship #godawgs

Jason kept the Bulldogs theme going for Memphis’ professional newborn photos. He shared one of those photos in honor of the college football National Championship game, which was between his and Brittany’s favorite teams, the Georgia Bulldogs and the Alabama Crimson Tide.

The photo showed Memphis resting in a little basket with a helmet from each of his parents’ respective teams set beside him. Jason was hopeful Memphis would be the Bulldogs’ good luck charm, but the Crimson Tide ended up winning.

Fast forward all of these months later, and Jason is now able to take his little man out to ballgames. This time it’s baseball season, and Jason is just as proud to sport Atlanta Braves gear as he is Bulldogs attire.

When Jason was recently invited to perform at the Braves stadium, he knew he had to invite his entire family along, including little Memphis. The 7-month-old was dressed head to toe in Braves gear, including a tiny jersey and hat.

Jason wore an outfit that coordinated with his son’s. The only differences were that his hat had a red bill and he was wearing a Bulldogs t-shirt instead of a Braves jersey.

But the one part of their outfits that matched perfectly were their big smiles. Seems like they were both enjoying their day!

Jason shared a series of photos showcasing his family’s fun day at the Braves stadium, so be sure to swipe through to see them all.

pretty cool moment getting to hang with the family at @suntrustpark today before the show. Really special day for me and my family. Cant wait to play for u guys tonite in the ATL. #lifelongbravesfan

Just when you thought you had seen the cutest photos of baby Memphis, Jason went and proved you wrong by sharing these!

Jason’s performance at the Braves stadium was just one of many monumental moments that have defined his summer so far. One of the others has to be the release of his new duet “Drowns the Whiskey,” which features Miranda Lambert. Be sure to check that song out below.

Another huge moment was when he and Brittany announced they’re expecting their second child together. Memphis will soon have another sibling to help him represent Georgia’s sports teams!