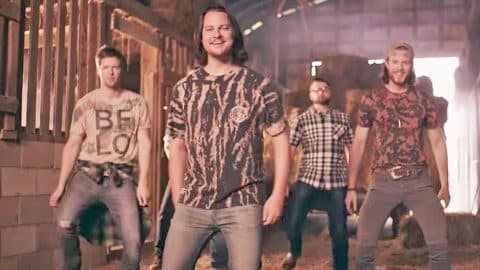 The Perfect Song For A Couple Of Hillbillies

When Blake Shelton heard the song “Hillbilly Bone,” it instantly reminded him of one artist…Trace Adkins. The two had been friends for years, so Shelton decided it would be fun to see if Adkins would record the song with him as a duet.

That’s exactly what they did, and “Hillbilly Bone” was released in October 2009. Written by Luke Laird and Craig Wiseman, the song is all about how everyone has a little bit of hillbilly in them, even if they’re from the big city.

Shelton and Adkins proved to be the perfect team, as they rocked “Hillbilly Bone” all the way to the top spot on the Hot Country Songs chart and the 40th spot on the Billboard Hot 100.

To this day, the two singers enjoy surprising their fans by showing up unannounced to each other’s concerts to sing “Hillbilly Bone.”

As one of the most popular songs of both Shelton and Adkins’ careers, you can bet that “Hillbilly Bone” has been covered plenty of times. But we guarantee that you’ve never heard a cover like the one we have to share with you right now.

A Rockin’ A Cappella Arrangement

Country group Home Free found their claim to fame after they won the NBC competition series The Sing-Off in 2013. Since then, the group has developed a strong and ever-growing fan base, and has accumulated over 326 million views on their YouTube channel.

What sets Home Free apart from other groups is the fact that they sing everything a cappella. That means that every Home Free song is created without the use of a single instrument. Instead, they use their voices as their instruments, resulting in the creation of some unique country covers.

The group’s talent is placed on full display in their cover of “Hillbilly Bone.” Their arrangement predominantly features bass singer Tim Foust, which makes sense considering the fact that his deep voice matches up with that of Adkins’.

As you listen to Home Free sing, you won’t be able to keep yourself from stomping your feet and clapping along. Their cover is just that energetic! In fact, don’t be surprised if you find yourself hollering “yeehaw!” right along with them.

A Fun Video For A Fun Song

The video further enhances the song’s rowdy vibes, and shows the Home Free guys living it up at an outdoor party out in the country. Baritone harmony singer Adam Chance brings some humor to the video by playing the part of a MINI Cooper-driving city boy who is terrified of a chicken.

To sum it all up, Home Free’s cover video of “Hillbilly Bone” is about as entertaining as it gets. Check it out below!

Home Free’s cover of “Hillbilly Bone” is one of the tracks that appears on the group’s album, Timeless. Get your copy by visiting the group’s official website here!