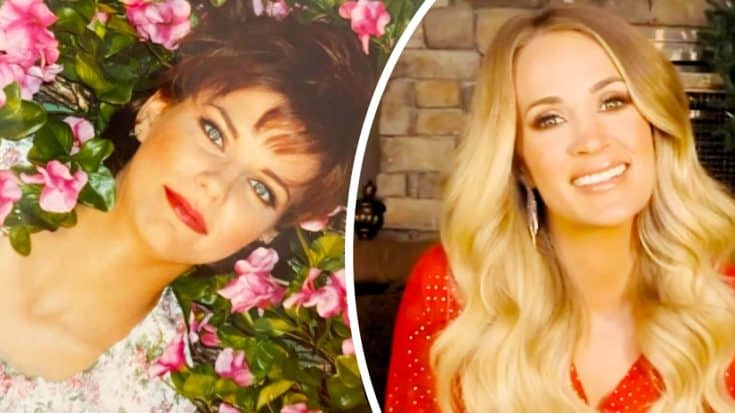 Valentine’s Day is all about the art of romance. Every year on February 14, couples charm one another with gifts of flowers and chocolate, all in honor of the love they share.

But no Valentine’s Day would be complete without listening to some good love songs. Country music certainly isn’t lacking in that department. In fact, some of the best love songs of all time are country songs.

If you really want to woo your Valentine this year, play ’em one of the ten tunes on this list. From lighthearted love songs to sweet duets, these songs are sure to make your Valentine’s heart skip a beat!

Johnny Cash wrote “I Walk the Line” while he was stationed overseas during his time in the Air Force. He had just married his first wife, Vivian, and once said during a phone interview that he wrote the song as a “pledge of devotion.” The song was a smash success, and became Johnny’s first number one hit on the charts.

While Johnny and Vivian’s love didn’t last, the popularity of “I Walk the Line” did. It is still considered to be one of the best country love songs of all time.

Most swoon-worthy lyric: “Yes, I’ll admit that I’m a fool for you. Because you’re mine, I walk the line.”

Jason Michael Carroll co-wrote this sweet love song, which is one of the biggest hits of his career. It peaked at the sixth spot on the Hot Country Songs chart, and was also a crossover hit.

The song is told from the perspective of a man who feels incredibly lucky to be with the woman of his dreams. Even after the passage of time, he still finds her just as beautiful and intriguing as ever. Now if that’s not romantic, we don’t know what is!

Most swoon-worthy lyric: “Baby just look at us, all this time and we’re still in love. Something like this just don’t exist between a backwoods boy and a fairytale princess.”

A track off of her album Storyteller, “Heartbeat” was co-written by Carrie Underwood. The intimate tune made its way to the top of the Country Airplay chart and also reached the second spot on the Hot Country Songs chart. It was a crossover success as well, peaking at the 42nd position on the Billboard Hot 100.

Sung beautifully by Carrie, the delicate tune is all about enjoying quality time with your special someone. How fitting is that for Valentine’s Day?

Most swoon-worthy lyric: “You pull me closer, my head on your shoulder. Baby, we won’t need a song.”

4. “I Swear” By John Michael Montgomery

This iconic country ballad was written by Gary Baker and Frank J. Myers, and was recorded by John Michael Montgomery. His version became a number one country hit following its release. Pop group All-4-One released their own version a few months later, and topped the Billboard Hot 100 with their recording.

The premise of “I Swear” is simple, but powerful. In the song, the narrator promises his love that he will always be devoted to her. With such a romantic message, it’s no wonder why this is one of the most popular country love songs ever.

Most swoon-worthy lyric: “For better or worse, till death do us part. I’ll love you with every beat of my heart. I swear.”

Perhaps the sexiest song on this list, “Your Man” was co-written by Chris Stapleton, Chris DuBois, and Jace Everett. The song ended up in Josh Turner‘s hands, and he recorded it as his fourth single. It ended up becoming his first number one hit.

While the song’s sultry lyrics were intriguing on their own, Josh’s deep voice added a whole new level of appeal. Now fellas, this is one song that is sure to make your country gal’s heart beat a little faster!

Most swoon-worthy lyric: “Baby lock the door and turn the lights down low. Put some music on that’s soft and slow.”

6. “Remember When” By Alan Jackson

Alan Jackson was the sole songwriter on the reflective “Remember When,” which spent two weeks at the top of the charts. It is one of Alan’s most emotional songs to date, and also one of the most personal.

The song serves as Alan’s way of looking back on his life with his wife, Denise. He covers all of the major stages of their relationship, from their wedding to the birth of their children. We couldn’t think of a better song to listen to with your one and only this Valentine’s Day.

Most swoon-worthy lyric: “Remember when, we said when we turned gray, when the children grow up and move away, we won’t be sad, we’ll be glad, for all the life we’ve had. And we’ll remember when.”

7. “I Cross My Heart” By George Strait

No Valentine’s list of country songs would be complete without this one. Written by Steve Dorff and Eric Kaz, “I Cross My Heart” is the most recognizable song from Pure Country, which starred George Strait. The tune became a number one hit for George in both the U.S. and Canada after its release.

At the end of Pure Country, George’s character sings “I Cross My Heart” to the girl that he loves, and manages to win her affection in the process. It’s no surprise why, because we fall head over heels for this song every time we hear it.

Most swoon-worthy lyric: “You will always be the miracle that makes my life complete. And as long as there’s a breath in me, I’ll make yours just as sweet.”

We couldn’t think of a more appropriate song to include on this list than “Valentine” by Martina McBride. Written by Jim Brickman and Jack Kugell, “Valentine” was released in 1997 off of McBride’s album Evolution. The song reached the third spot on the Adult Contemporary chart, and also snuck its way into the Top 50 on the Billboard Hot 100.

In the song, McBride declares her never-ending love for her sweetheart and forever Valentine. We couldn’t think of a more romantic song for you to listen to with your special someone this Valentine’s Day!

Most swoon-worthy lyric: “You would still have my heart until the end of time. You’re all I need, my love, my Valentine.”

Co-written by Keith Urban, this upbeat love song was a bigger hit than he could have ever imagined. It spent a total of six weeks at the top of the country chart and claimed the 23rd spot on the Billboard Hot 100. The song was so popular that Billboard named it the number one country song of the first decade of the 21st century.

“Somebody Like You” allows Keith to show his affection for a special gal in his life, as he dreams of being able to love her. This is one song that you and your honey will both love to listen to this Valentine’s Day, that’s for sure!

Most swoon-worthy lyric: “Sometimes it’s hard for me to understand. But you’re teachin’ me to be a better man.”

10. “Forever And Ever, Amen” By Randy Travis

This is one song that needs no introduction. Written by Paul Overstreet and Don Schlitz, Randy Travis turned “Forever and Ever, Amen” into one of the biggest hits of his career. It topped the charts in the U.S. and Canada, and remains one of Travis’ most recognizable songs.

You can’t go wrong by playing this one for your love on Valentine’s Day!