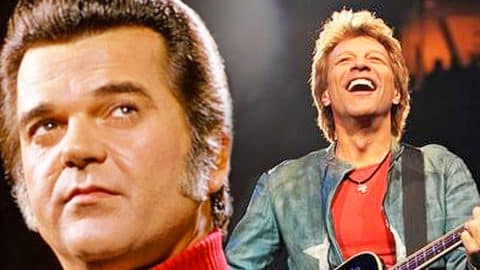 Jon Bon Jovi is primarily known for his work in the rock genre, but as it turns out, the “Livin’ on a Prayer” singer knows how to pull off a country tune as well.

During a performance in Little Rock, Arkansas, Bon Jovi chose to perform a classic Conway Twitty song, his 1958 hit “It’s Only Make Believe.”

“It’s Only Make Believe” was co-written by Twitty and Jack Nance, and was released on Conway’s album titled Sings. The song was a major hit not just in the U.S., where it claimed the top spot on the Billboard country chart, but also in Canada and the UK.

After Bon Jovi learned that Twitty was the artist behind the song, he continued to perform “It’s Only Make Believe,” and was happy to do so for the crowd in Conway’s home state.

The Little Rock crowd went wild as soon as Bon Jovi started singing the first few notes of Twitty’s classic song. He certainly didn’t disappoint, and ended up delivering an impressive and passionate rendition that we think Twitty would be proud of.

You can listen to Bon Jovi sing “It’s Only Make Believe” in the video below.

By the end of the song, the crowd roared with applause for Bon Jovi, and once you watch his performance you’ll see why!