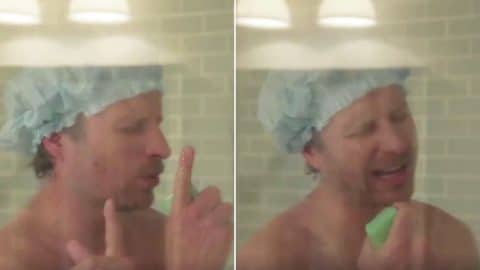 Dierks Bentley is busy these days.

On top of promoting his hilarious new music video for “Somewhere On A Beach”, the country music heartthrob is preparing for one of his biggest gigs to date: Host of the Academy of Country Music Awards.

Bentley will be hosting the awards show with longtime pal and fellow country crooner, Luke Bryan. The two announced their future collaboration in the hilarious promotional video featured below.

I’m excited to announce that I’ll be joining my friend Luke Bryan to co-host the the 51st ACM – Academy of Country Music Awards on Sunday, April 3, 2016!

They are going to be awesome together! Both Bentley and Bryan are hilarious on their own, but we can’t wait to see what they come up with together!

In a separate ACM promo video, Bentley gets hyped up for the awards. We see him practicing karate in a robe, talking to himself in the mirror, doing vocal exercises, and most importantly, singing “Hot Line Bling” in the shower. Yes, Dierks Bentley in the shower. We told you this was good.

Watch the ACM video below, and remember to mark your calendars for April 13th!