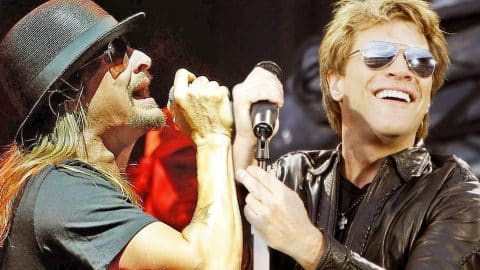 In a performance from 2010, Kid Rock shocked everyone at a Bon Jovi concert when he came out to perform “Old Time Rock And Roll” with the legendary band.

Jon Bon Jovi was talking to the audience when he introduced his keyboardist, David Bryan. He raved about Bryan’s accolades then said, “You’ve got somethin’ for me! What do you got?!”

Bon Jovi followed up with the opening lyrics and didn’t stop there! Out of nowhere, Kid Rock appears on stage and sings a rockin’ solo!

The two singers traded verses until they took a break to showcase an insane saxophone solo, all the while dancing during musical breaks.

At the end of the song, Kid Rock strums Richie Sambora’s guitar in a move only he could have pulled off!

The performance took place in London and was actually the very first time Bon Jovi had ever performed the cover live! The fans in the audience witnessed some rock n’ roll history!  Watch the performance below.