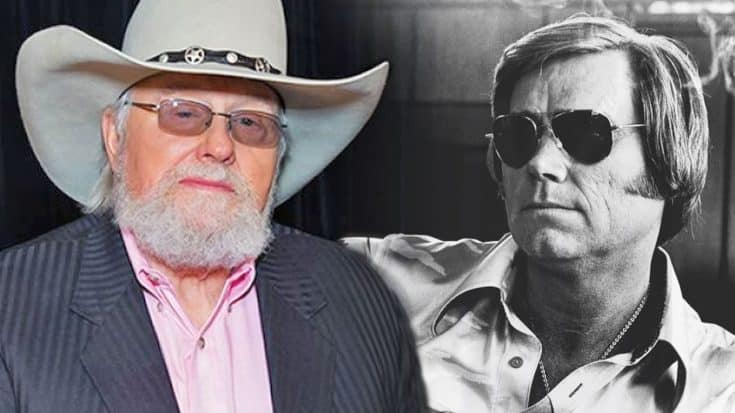 On a day that country music stood still, Charlie Daniels somehow found the perfect words to remember a legend.

On August 12, 2012, George Jones announced his farewell tour, The Grand Tour, where he was scheduled to perform in 60 cities across America. His final date was slated for November 22, 2013 at the Bridgestone Arena in Nashville, Tennessee.

On April 18, 2013, Jones was hospitalized for a slight fever and irregular blood pressure, which forced him to postpone two shows. According to Medical Daily, he passed away in the wee hours of April 26, 2013 from Hypoxic Respiratory Failure. HRF occurs when there is “insufficient oxygen for the body tissues to function”.

Daniels recalled where he was the first time he ever heard the name George Jones – in high school. Daniels went on to call Jones’ career one of the most “legendary careers in the history of the music business”.

Daniels touched on the fact that “George is probably the most imitated country singer of all time”. You can tell which younger singers are influenced by Jones, Daniels says, because “you can hear a little bit of The Possum” in their vocal styling, although no one will come close to the gift Jones had.

He spoke of Jones’ God-given talent of storytelling, manipulating lyrics, making us all feel the real emotion of a song, and singing for every person.

“He sang for us all,” Daniels said. “The non-stop partiers, the guy who’s always alone, the girl done wrong, the puppy lovers, the extrovert, the introvert, the guy at the end of the bar who never seems to go home, the happy, the unhappy, and everyone in between. George had a song for everybody.”

Before performing the hymn “Softly and Tenderly”, Daniels ended the eulogy on a bittersweet note.

“He joins the ranks of the greatest of the great. Roy Acuff, Ernest Tubb, Hank Williams, Marty Robbins, Johnny Cash, Earl Scruggs, and Bill Monroe. As long as there is country music, he will be remembered,” he said, as the entire crowd gave him a round of applause.

Watch his moving eulogy and performance of “Softly and Tenderly” below.