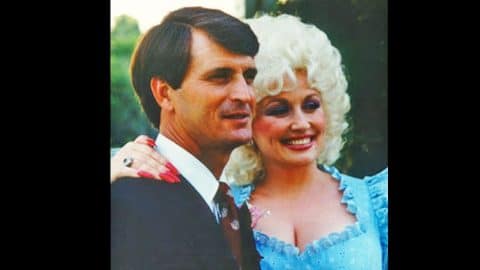 Dolly Parton married Carl Dean on May 30, 1966, two years after he spotted her at a local laundry mat.

She informed him she did not want to be a housewife, instead she wanted to pursue her dreams of being a country music singer, and we know exactly how that turned out.

Now, 50+ years after their private wedding, they have renewed their vows in a big ceremony. He is very good at staying out of the spotlight, and Dolly doesn’t talk about him too much. There’s so much we want to know about him!

We’ve done the research so you don’t have to, so here are 7 things you NEED to know about Parton’s husband of 50 years!

1. He Loves Dolly Very Much

It's 52 years of marriage for @DollyParton and Carl Dean! Tweet 'em lots of ❤️ today, y'all. pic.twitter.com/3RJCGHLF7C

Even though he lives his life out of the public eye, unlike his very famous wife, that doesn’t mean Carl loves Dolly any less.

They’ve been married 50 years and Dolly calls him her best friend.

Dolly Parton with her husband, Carl Dean, 1966.
Although Parton does not use Dean's surname professionally, her passport says "Dolly Parton Dean" and that she sometimes uses Dean when signing contracts.
They've been married now for 52 years. pic.twitter.com/UXE45n39Df

Since he does not hit the road with Dolly, Carl spends most of his time at their home outside of Nashville.

“My husband is a loner,” Dolly told People Magazine. “He doesn’t particularly care about being around anybody but me. He’s just always asked me to leave him out of all this. He does not like all the hullabaloo.”

According to an insider at Closer Weekly, in 2015, Dolly was away from home for 165 days out of the year.

“Theirs isn’t a traditional marriage, but it works for them,” a friend tells the magazine. “Carl’s attitude is, ‘You go do your thing and I’ll do mine… see you when you get home!’”

3. They Are Total Opposites

If you couldn’t tell already, Dolly and her husband are the epitome of the phrase “opposites attract.”

For a woman as famous as Dolly, she is married to a man who hates the spotlight!

“We’re completely opposite, but that’s what makes it fun. I never know what he’s gonna say or do. He’s always surprising me,” she told People Magazine.

Another secret to her long-lasting marriage? Respect.

“He doesn’t like crowds,” she told Huffington Post. “And I respect his privacy. I respect the fact that he loves to be out of the limelight. That’s one of the reasons I think we’ve lasted so long.”

4. He Has A Successful Business

"The secret to a long marriage is to stay gone." – Dolly Parton, who married Carl Dean on this day in 1966. They're still together. pic.twitter.com/ia6flZGAiF

Since 1977, Carl has owned and operated an asphalt-laying company in Nashville.

His business is still running after almost 40 years, so we’d say it’s a success!

5. He And Dolly Love Taking Trips In Their RV

♫ HAPPY BIRTHDAY ♫
1942 Carl Dean is born at Saint Thomas Hospital in Nashville. He is destined to marry Dolly Parton, a role in which becomes known for his avoidance of public sightings. pic.twitter.com/Zi1IbT4wts

When Dolly has down time, she and Carl love taking their RV out and just driving around together. They’ve seen all of Tennessee and Kentucky.

“We sightsee all of Tennessee and Kentucky,” she says. “The areas that we can get back home from at night. Sometimes we’ll stay over at a Days Inn where we can just pull up and sneak me in. We don’t care, as long as the bed’s clean and there’s a bathroom. That’s how we live.”

They even go through restaurant drive-thrus in the RV!

Watch her talk about their RV trips below!

6. He’s Only Seen Dolly Perform ‘A Time Or Two’

Dolly was on Ellen DeGeneres’ show a few years ago and Dolly revealed that Carl is “nervous seeing [her] perform.”

“It’s almost like seeing your kid in a recital,” she told the talk show host. “He’s afraid I’ll mess up. Actually he has seen me a time or two and it did relax him a little. He saw that I do mess up and it’s OK because people are not going to punish me for it.”

“When I am on stage, I am Dolly Parton – and the faker I look, with the hair and the double Ds and all, the more real I am, the more true to my roots,” she told the Daily Mail. “But when I am at home, cleaning out the fish Carl has caught or still putting on the laundry, I am Dolly Dean.”

Dolly brought Carl to a BMI dinner in 1966. She was receiving her first songwriting award for penning the Bill Phillips hit “Put It Off Until Tomorrow.”

“This was my first big record. It went to No. 1 for Bill, and it was BMI’s Song of the Year,” Parton told The Boot. “So Carl and I got dressed up, he was in a tux, and we drove to the dinner. We got out and walked up the red carpet and went inside and sat through dinner and the awards, and I went up and got my award.”

During the car ride home, Carl turned to her and said, “Dolly, I want you to have everything you want, and I’m happy for you, but don’t you ever ask me to go to another one of them dang things again!”

And she never did. They have a unique marriage, but they make it work because they love each other and when they are together, they have a grand ol’ time!