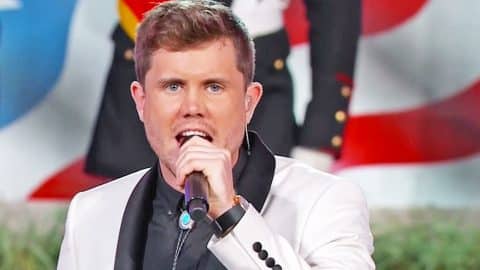 During his time on American Idol, Trent Harmon managed to steal countless hearts, which led to him stealing the show as well. Week after week he blew viewers away with the limitless power of his voice, and the votes came pouring in. Eventually, all of those votes made Harmon the champion of the 15th and final season of Idol.

Following his big win, Harmon expressed his desire to pursue a career in country music. When it comes to his debut album, Harmon is planning to release something country with a blend of other musical styles, particularly soul.

While fans wait for Harmon to release his album, he’s kept himself busy with various appearances and performances. One recent performance of his that has people talking was his stunning rendition of the National Anthem, which he sang during a televised Memorial Day Concert.

On Sunday (May 29), Harmon took center stage to open the PBS National Memorial Day Concert, which was hosted in Washington D.C. While heavy rain clouds loomed overhead, Harmon managed to brighten things up with his beautiful performance of the National Anthem.

Backed up by the National Symphony Orchestra, which played a soaring accompaniment, Harmon sang each note with power and conviction. He had no need to embellish his performance, because his strong voice carried the song on its own.

The moment when Harmon hits and holds out the final long note is chill-inducing, and it’s clear from seeing the crowd’s reactions that they were equally mesmerized. Check out Harmon’s breathtaking live performance of our National Anthem in the clip below.

It’s easy to see why Harmon won Idol after watching this clip, and we wish him nothing but the best in his future career!